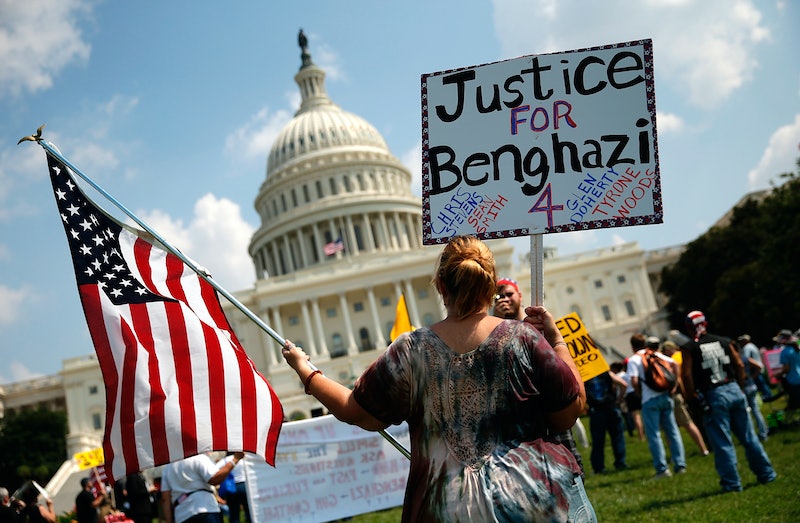 Sorry, Fox News die-hards, it looks like, once again, your conspiracy theories have been debunked — and by your own party, no less. On Friday, the Republican-controlled House Intelligence Committee report on Benghazi found that the CIA and the Obama administration responded appropriately to the attacks on the U.S. diplomatic compound in Libya two years ago that left four Americans dead.

Trying to convince Benghazi truthers of the administration's version of events is a bit like playing whackamole — just when you think you've settled the issue and provided a convincing report on the 2012 attacks, out pops another conspiracy theory. Maybe though, this time, it'll finally be the winning strike: not only is the report a result of a two year investigation into the matter — looking at thousands of documents, emails and other data — it's an investigation that's been led by the GOP- controlled intelligence committee.

And the report is unequivocal: both the CIA and President Obama's appointees did all they could to save the lives of U.S. personnel in Libya. Not only that, they even went above and beyond the call of duty. As the ranking Republican of the committee, Rep. Mike Rogers (Mich.) and ranking Democrat Rep. C.A. Dutch Ruppersberger (Md.), said in a statement released with the report:

We concluded that all the CIA officers in Benghazi were heroes.Their actions saved lives.

Contra Fox News' repeated claim that State Department told security forces to “stand down” (a claim they not only originally reported, but also repeated a whopping 85 times), the report found “no evidence that there was either a stand down order or a denial of available air support.”

The committee also found that intelligence didn't "miss" the opportunity for a military rescue rescue or take too long sending in a CIA rescue team. Unsurprisingly, the report also concluded that Senator Rand Paul's pet theory — that Benghazi was a coverup to distract from a secret arms sale between the CIA in Libya and Syrian rebels — had, uh, no evidence to support it. (Cough, because it was nuts, cough.)

Even when it came to the hotbed of the conspiracy — U.S. Ambassador Susan Rice's speech post-attacks which erroneously claimed that the attack evolved from a protest — the report came out in favor of the Obama administration. The committee found that her assertions came from "flawed" information given by intelligence analysts; not, as many have argued, from an intent to mislead the public and secure Obama's reelection.

Said Rep. Adam Schiff (D-Calif.), a member of the Intelligence Committee and the Benghazi Select Committee, in a statement:

It's my hope that this report will put to rest many of the questions that have been asked and answered yet again, and that the Benghazi Select Committee will accept these findings and instead focus its attention on the State Department's progress in securing our facilities around the world and standing up our fast response capabilities.

While it would be nice to think that this report will finally stop the seemingly endless Benghazi debate, if there's one thing conspiracy theorists can be proud of, it's their persistence in the face of damning evidence.

More like this
Eurovision Has Been Given A Whole New Look Ahead Of Its Liverpool Debut
By Bustle UK
This Is When Netflix Is Going To Start Charging You For Sharing Passwords
By Darshita Goyal
6 Organizations Fighting Police Brutality That You Can Support Right Now
By Syeda Khaula Saad and JR Thorpe
Pret & Costa’s Coffee Is The Strongest On The High Street, According To Which?
By Sam Ramsden
Get Even More From Bustle — Sign Up For The Newsletter
From hair trends to relationship advice, our daily newsletter has everything you need to sound like a person who’s on TikTok, even if you aren’t.