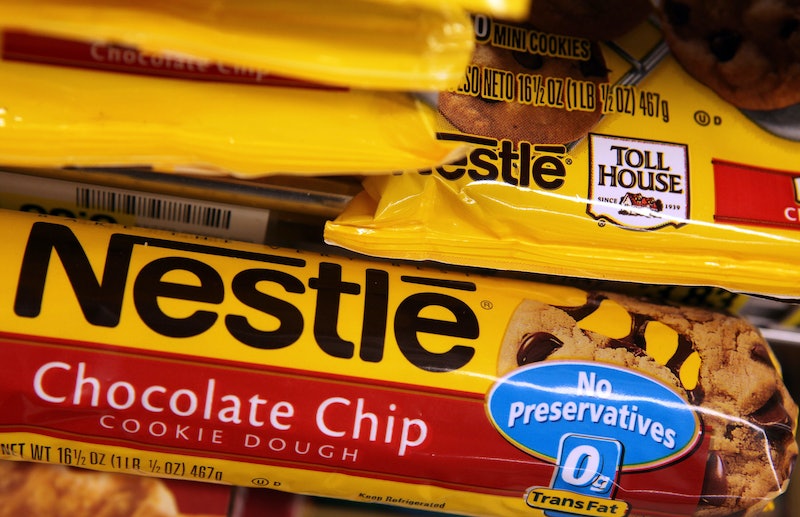 First, they conquered the candy bar. Next, they dominated hot chocolate; later, coffee. Now, the company that brought you the godly combination of George Clooney and Nespresso is working on creating the product of your dreams: yes, Nestlé is making "exercise in a bottle," a drink that will trigger your fat-burning enzymes. OhmygodIknowright.

Sure, we had the caffeinated bra, the wine-a-day-diet, the banana diet. But what we really wanted — what we've always really wanted — was something that we could consume, that would make us thinner. Preferably while watching our favorite new show on Netflix, maybe also while eating some Christmas Crunch. And Nestlé is on its way to achieving this miracle drink, according to an article published in the science journal Chemistry & Biology.

The key to the wonder-beverage? An enzyme called AMPK, the "metabolic master switch," which would can be stimulated by a compound C13. The wonderful scientists at Nestlé found that, on mice at least, acting on the AMPK enzyme stops fat production in the liver — essentially, imitating the way we burn fat when we exercise. Explained Professor Sakamoto to Bloomberg:

AMPK is a key protein in every single cell in your body and is naturally activated by exercise. It monitors your energy status, like a fuel gauge in a car, and tells you to fill up when your energy is low.

Our research has revealed new knowledge about this master switch.In some conditions, such as diabetes, the body doesn't respond properly to insulin and muscle cells reject the message about their need to take up glucose. However, even under such medical conditions, AMPK can find an alternative way and take up glucose in muscle.

Of course, the product is still in the early stages, so we shouldn't get ahead of ourselves. They haven't figured out yet whether stimulating AMPK has the same effect on humans as it does on mice, or whether it actually can work in drink form.So, sure, "exercise in a bottle" won't be on your Trader Joe's shelves by Thanksgiving (would that it were!). And really, if and when it does hit the marketplace, there'll be lot of caveats around it: sadly, it's not meant for us couch potatoes, really it'll be to help those facing diabetes and obesity, and even in those cases, it would just be an aid.

As Professor David Haslam, chair of the UK’s National Obesity Forum, said to the Independent:

Introducing any such drink would have to be done in a very careful manner, with a very strong message that exercise is absolutely crucial to cancer prevention, reduction of diabetes and heart disease.

You can’t replace exercise with a drink and if this product comes to launch, would they really only be targeting the disabled and exercised who can’t exercise, or would they target the general population? I would want to keep a very close eye on this and make sure they toe the line and that the messages are absolutely clear and correct.

More like this
Do Green Powders Work As Well As TikTok Says They Do?
By Carolyn Steber
An Expert Weighs In On The Viral Raw Carrot Salad Trend
By Alexis Morillo
Here’s Where The NHS Nurses’ Strike Currently Stands
By Sophie McEvoy
12 Aphrodisiac Desserts To Spice Up Your Valentine’s Day
By Kaitlyn Wylde
Get Even More From Bustle — Sign Up For The Newsletter
From hair trends to relationship advice, our daily newsletter has everything you need to sound like a person who’s on TikTok, even if you aren’t.