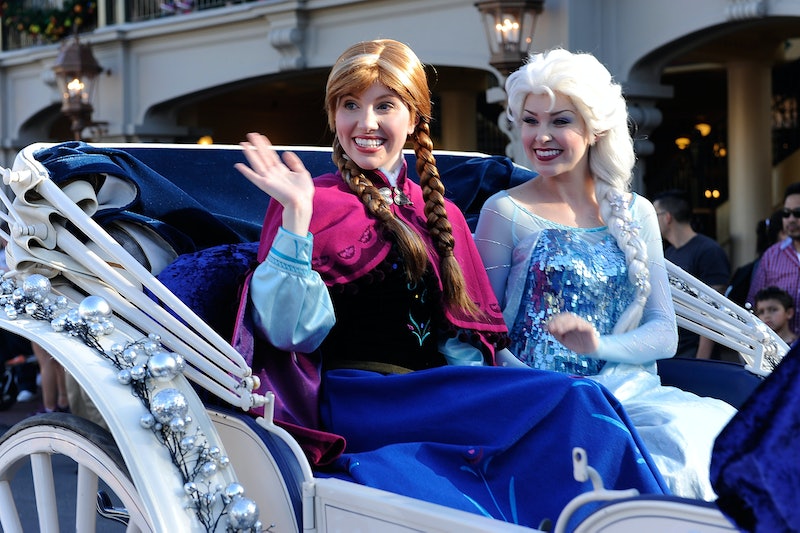 It was just last Friday that I stood on a subway platform underneath the Barclays Center and watched countless toddlers descend the stairway clad in blue tulle and tiaras. Disney On Ice: Frozen had just let out, and while the night brought chilled temperatures complemented by a wind chill, the Elsa dresses peeking from underneath these darlings' peacoats was enough to warm the hearts of many bystanders. The dresses they donned that night were just a handful of the three million "Frozen" dresses purchased this year.

It seems that Elsa didn't only freeze everything she waved her hand at in the film, which is inching toward its one year mark, but has also frozen her impact on kiddo's everywhere. Earlier this month, The New York Times reported that "more than three million 'Frozen' role-play costumes have been sold this year in North America." Moreover, the National Retail Federation "estimated that 3.4 million children dressed up as princesses of some type; the most popular costume for boys was Spider-Man." But, while Disney counts the numbers, some are concerned about the intangible impact those three million dresses are having on young girls. YahooStyle! begs the question: "Do these massive dress sales, however, mean that—more than ever before—we’re the throes of so-called princess culture, or conditioning little girls (and big ones) to fixate on finding their Prince?"

While many have commended Disney for not following its usual Prince-rescues-damsel-in-distress trajectory in "Frozen," others say the film still poses a problem. In September, The Daily Dot wrote:

“Don’t feel, conceal” becomes Elsa’s mantra in order for her to cope with her uniqueness.

The film point blank tells girls that their thoughts—their emotions—are things to be ashamed of. The fact that this catchy little rhyme is actually repeated multiple times throughout the film guarantees that it will imprint on its audience—an audience full of young, impressionable girls.

And, albeit a bit dated, in a 2012 interview with NBC, Peggy Ornstein, author of "Cinderella Ate My Daughter," posed a similar argument:

"All these products at such an early age push girls to focus on how they look. And when girls get overly focused on appearance, we see things like distorted body images, eating disorders, poor sexual choices, depression, low-self-esteem. So it’s really important that girl learn to feel their feelings on their inside rather than focusing on how they look all the time,"

Look, I get it. After hearing my younger sisters sing "Do you want to build a snowman" for far too long, I figured that it was best that I watch the film instead of pleading with them to "PLEASE STOP SINGING THAT SONG!" Although it was cute, I, too, was a bit thrown off when Elsa's parents locked her in a room because she couldn't stop freezing things (poor, girl). But, I was also here for Elsa when she built herself an ice castle with her hands because (1) I wish I could do that, and (2) a man didn't have to do it for her. So, it's a bit of stretch that three million "Frozen" dresses sold might or might not equate to a little girl's low self-esteem.

Clearly, I'm not here to play devil's advocate for Disney because it's certainly had its share of highs and lows. But, if you would have seen how adorable those 3-feet-tall Elsa's were leaving Barclays last week, it's just hard to extrapolate that their lives should or will be filled with anything less than the pride they exuded in all their "Frozen" getup glory.