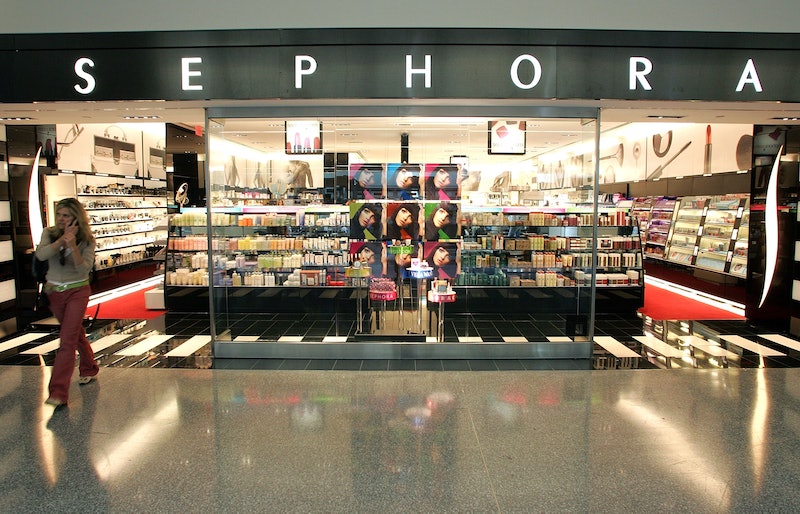 Most of us makeup lovers know that there are two retailers out there who dominate the beauty scene -- who stock everything from Benefit Cosmetics to D&G to Urban Decay: Macy's and Sephora. (Sorry, ULTA. Maybe next time.) If you're like me, however, and you prefer shopping at the places you know will give you more for less, then the latter is probably your go-to for any lipstick or eye shadow cravings. But this just in, Sephora is being sued for racial discrimination.

Xiao Xiao, Man Xu, Jiali Chen and Tiantian Zou -- four women of Chinese decent -- are suing Sephora and LVMH, its parent company, for deactivating and blocking their accounts. According to Fashionista , the retailer's deactivation of these accounts was "based on the ill-founded and discriminatory belief that all Chinese/Asian customers abuse discount sales to engage in bulk purchase for re-sale." This all happened during Sephora's 20 percent off sale earlier in November, which culminated in a massive website outage.

Post outage, Sephora wrote an open letter to customers and users on its Facebook page, part of which read:

In some instances we have, indeed, de-activated accounts due to reselling -- a pervasive issue throughout the industry and the world. As part of our ongoing commitment to protecting our clients and our brands, we have identified certain entities who take advantage of promotional opportunities to purchase products in large volume on our website and re-sell them through other channels.

That reselling is a problem within the retail industry isn't a question up for debate, really. Just like sites like Limewire or illegal YouTube video conversion impact sales within the music industry, so, too, does the reselling of beauty products or apparel affect those particular industries.

There's a grey area, though. We know that hugely successful retailers or designers probably won't have to file for bankruptcy just because someone is buying their products in bulk for resale. Just as we know that some people who do buy in bulk for resale depend on that income for survival. But morality obviously comes into play here.

Plain and simple, the fact that the four women who are coming forward are all minorities doesn't look good for Sephora. Whilst resale has its flaws, there's potentially something far worse is going on. Sephora, of course, stated clearly that users from all around the world were blocked, and that the allegations severely distort the facts at hand. But in truth, we don't yet know that the four complainants were even planning on reselling. The site was offering an amazing promotion, which I would have personally taken advantage of myself.

So, did Sephora intentionally block Asian minorities on the grounds of illegal resale? Or did they intentionally block Asian minorities under the assumption that their Chinese clientele is somehow more likely to be buying in bulk for resell, rather than for personal use or even gifting? I mean, holiday season is upon us, after all. Either way, I don't think the accusation of racial discrimination will go away too quickly.

If, however, the site really crashed because people on a far more global scale were buying in bulk, then I guess it's just another of those blurred moral moments within retail that illustrates the fine line between right and wrong. It seems we will all just have to stay tuned.