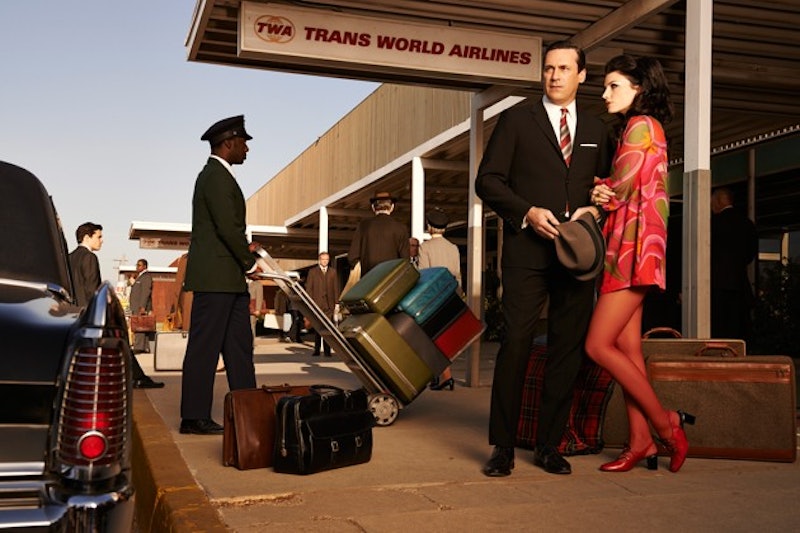 It was about five years ago that I started traveling solo. I had been put through the emotional ringer for the umpteenth time by a guy who had broken my heart more times than I can count, and needed to get the hell out of dodge. (Dodge being New York City and every single inch of it that reminded me of him.)

At the time, I had been living in jeans and a black sweatshirt. The loss of this particular person made my already difficult daily struggle with depression even worse, and those jeans and that sweatshirt had been my uniform for almost two whole months. But on the day that I officially left my apartment to begin my trip, I decided that I needed to spice up my outfit. It wasn't that my depression had suddenly lifted, but because I felt I was sort of giving a big fat, “f-you,” to the man who broke my heart, as I peeled my uniform from my body, I reached for some heels and my favorite Chanel lipstick. In that moment, I was making an attempt at getting myself back to who I was before I knew him, and although it would take a couple years to fully recover, that was the day that I dressed up to board a plane for the first time in life. And I’ve been doing so ever since.

These days, I’m no longer that broken person I was five years ago, crying the whole way to the airport in new Prada shoes. I'm someone who gets dressed up on planes for other reasons entirely. If you can’t imagine for the life of you what those reasons might be, then allow me to share. You might even come to the realization that dressing up on a plane is right for you, too.

While I think sweatshirts are cozy for loungy days, sweatpants are just another beast entirely. They’re sloppy, ugly, and have no redeeming qualities. The only thing worse than sweatpants are sweatpants with something written across the butt, and yes, those still exist, because the woman on the plane next to me last week was wearing white ones. Does anyone really want to look like they stole their travel attire from Paris Hilton circa The Simple Life in public? I would really hope not.

SITTING ON THE PLANE IS A GREAT OPPORTUNITY TO ROCK HEELS

I love heels. I think they’re great and I own more heels than flats, but … I still have yet to learn how to walk in them like a pro. In my mind, having so many gorgeous heels that aren’t worn enough on the streets of New York City means that flying on a plane is a great opportunity to show them off — and start the breaking-in process. You're mostly sitting anyway, and if they're uncomfortable for walking in the terminal, well then, good to know before you try breaking them out on the city streets again.

IF THE PLANE GOES DOWN, I’D LIKE TO LOOK MY BEST

Growing up, my mother taught my sister and I to always wear nice underwear, because you never know what could happen. Our mother wasn’t suggesting we might get lucky — she was talking about an accident. Wouldn't it just awful if, when an EMT or ER doctor removed our clothing, saw that we were wearing undies with holes in them?! Or, even worse, those equally awful period-only undies that are really supposed to be for when you only have your period?! OK, so it probably wouldn't matter at all, but if the worst happens, I'd still like to be wearing my best.

As someone who doesn’t have to dress up for work, dressing up to travel makes me feel like I’m really fancy and important. You know, the way people who had cell phones in the early '90s (before the rest of us) acted even when they were in the grocery line; they just had to be on those damn phones.

In dressing for success, I feel more confident, and honestly, who doesn’t want to feel that way, especially when they’re on a plane next to someone who won’t stop talking about neck pillows?

IT'S A SPECIAL OCCASION

I get dressed up for my birthday, because, well, it's my birthday. I get dressed up for holidays, for weddings, and even for brunch with my friends because I'm celebrating something. How can traveling not be a cause for celebration? Even if you're stuck at Chicago O'Hare Airport for three hours, you're still on your way to someplace else, or on your way back from that place.

Traveling and getting to see new parts of the world, or the parts you really love over and over again, is basically the biggest celebration there is. I'm surprised they don't serve celebratory ice cream cake on flights, to be honest. We should all appreciate the privilege of travel more instead of complaining about it all the time. People in parts of the world where air travel is less ubiquitous get it — that's why they clap when you land instead of just pulling out cell phones. We could all learn a thing or two from that kind of appreciation.

BECAUSE NOT ENOUGH PEOPLE DO IT

No matter where I’ve been in the world, on what airline I’m traveling, or what class I’m flying, I’m always one of just a couple other people dressed up to fly. And, from what I’ve gathered, the other people are usually dressed up because they’re traveling for work, perhaps going from one meeting directly to the next.

I do not consider myself some special snowflake, but I do like to stick out from time to time. I don’t want to be another person in yoga pants, a baggy sweatshirt, and sneakers on the plane; every plane has enough of those people. I want to be the one in the dress, the heels, the makeup (which, honestly, I never really wear), and even the one whose undies match her bra. Yes, I want to be that person, because not enough people are.

It’s fun to be different from the crowd for a change, and if all it takes to be unique in a sea of monotony is to opt for something besides loungewear every time I travel, then hell yeah, I’m going to do it.

More like this
Craving The Beach? Here's Your Guide To A Solo Vacation In Turks & Caicos
By Alexis Morillo
The 21 Most Comfortable Slip-On Sneakers
By Maria Cassano
Tilda Swinton’s Neon Yellow Hair Is More Than A Style Statement
By Justine Knight
These Are The Best Socks A Woman Can Buy
By Lisa Fogarty
Get Even More From Bustle — Sign Up For The Newsletter