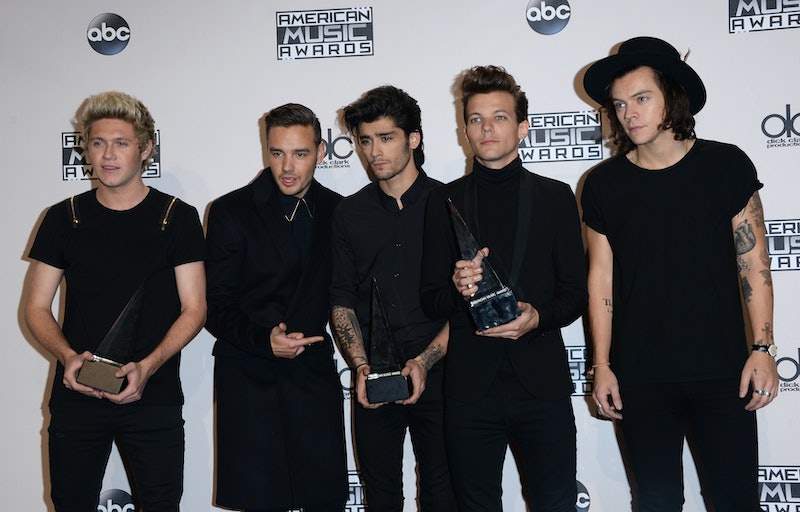 Can some designer just give these guys an ad campaign or make them the face of something already? One Direction attended the 2014 American Music Awards on Sunday night, and as incredible as their domination of it was (they took home three awards, including AMA Artist of the Year, beating out Beyoncé), we need to talk about their fashion. ASAP.

The British boy banders are seriously the best dressed guys in the music business. Yes, better than Kanye. Better than Justin Timberlake. Obviously better than Bieber. Don't even bother listing anyone else. One Direction dresses better. And last night's awards were no exception. But that conclusion did not come instantly. There were plenty of 'WTF?' 'OMG!' 'What was he thinking?' stages I went through before reaching the final conclusion that One Direction's AMA's fashion was absolutely flawless. Like shut it down, wrap it up, they won the night. But let's take a little jaunt down memory lane and revisit some of the simultaneously best and weirdest moments from 1D's fashion at the Los Angeles award show. And if you don't care about the fashion, then just relish in looking at various pictures of them. Now, on to the red carpet.

I'm a Harry girl, so whenever the guys pop up on screen, my eye goes instantly to him. But not this time, because I was too distracted by Louis' hair. I legitimately can't tell if he looks more like David Bowie or Tilda Swinton. Either way, I'm a little sketched out.

Liam Payne took a page out of Harry Styles' leopard print playbook tonight. Is the obsession going to spread to the rest of the band?

He's so adorable when he tries to dress badass.

4. HARRY IS WEARING A TUNIC

5. Oh Shoot, I Skipped Over Zayn

Alright, alright. Back to Harry. I can't tell if he looks rock and roll or like a pilgrim in that hat — BUT IT IS EVERYTHING.

7. Is Liam Wearing A Skirt?

The guys changed for their performance of "Night Changes," and it appears Liam has reemerged wearing a skirt. Oh, wait. No. That's just a long coat. Indoors, during a performance. Genius.

Niall traded his skull for some edgy, gold zippers.

Really, Louis? The tight neck with that hair is just all kinds of no.

Oh, he added a gold belt. Okay. I guess that counts?

Let's just take a second to appreciate this moment. Also, Harry and Liam clearly swapped "Steal My Girl" music video ensembles with the leopard and the band leader jacket thing. I'm not upset about it.

Tell me they aren't the best dressed guys in music.