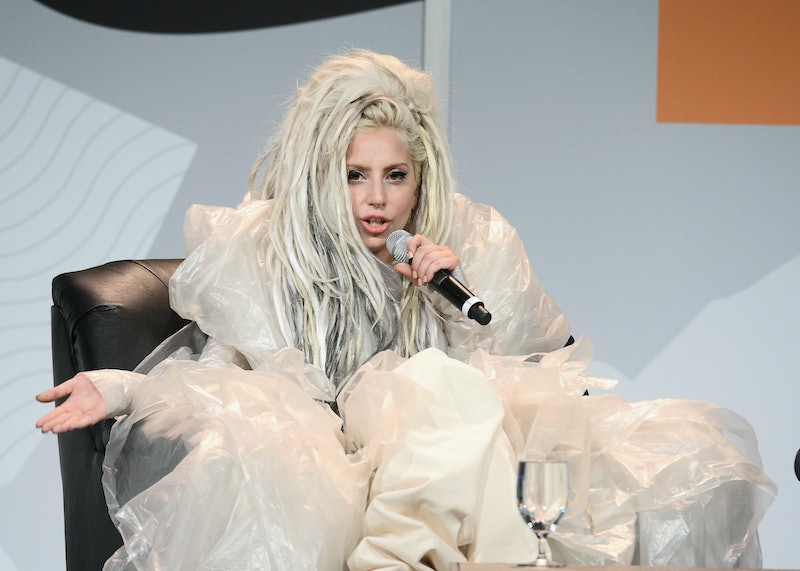 The baby bangs are back — at least for Lady Gaga, that is. Lady Gaga turned heads with a caramel-hued bob and super short bangs when she arrived in New York City from Paris last night (but, then again, when does she not turn heads?) You may remember when Beyoncé debuted the look for a hot second in October, but don't get it twisted: the Mother Monster was working them long before Queen B.

Gaga shared her short bangs on her Instagram back in July, but she was workin' 'em back in 2012, too.

Funny enough, I think the part of Gaga's new hair that interested me the most was the surprisingly normal color. Had she showed up with the same do in a shocking pink, electric blue, or even jet black, I probably would have been less taken aback. While I can't say that I'd ever try the trend for myself, they're almost, dare I say, normcore for the pop star, who's definitely had her share of wild dos. The brown tone makes the bob almost regular.

Also, quick side note: Gaga's makeup was on point here. So maybe that's contributing to the somewhat normalness of the hair.

There's no telling how long Gaga will keep the look; chances are, it's a wig, because let's be real: This is Lady Gaga. Next time we see her, she'll probably be sporting totally different locks. I'll be eagerly waiting to see whether she selects another near-regular haircut...

...or if she'll pick something next-level crazy on par with some of her craziest hairstyles.

Oh, and did I mention these hairstyles are all from this year? Man, Gaga's hairstylist/wig person must be pretty busy.