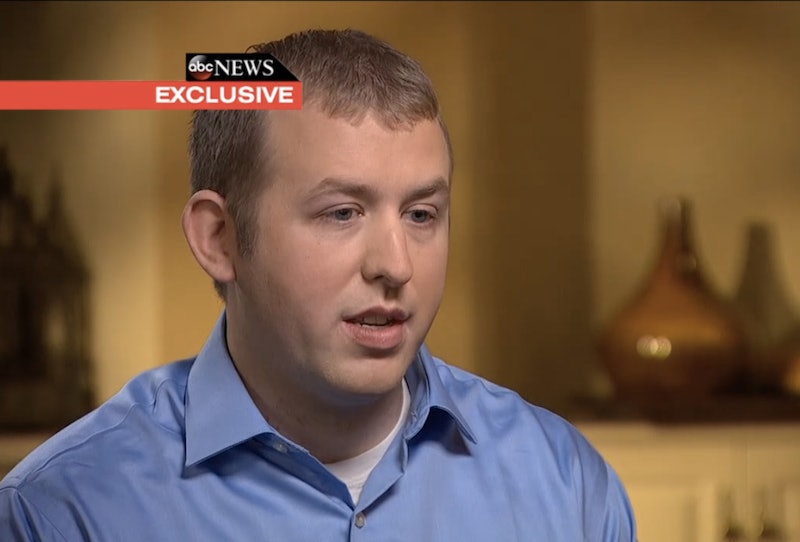 With Ferguson still reeling from the grand jury's (unsurprising) decision not to indict Officer Darren Wilson earlier this week, the remote — but still very real — possibility that he might return to the force has weighed heavy on everyone's minds. On Saturday, though, his lawyers confirmed that Darren Wilson has resigned from the Ferguson police department.

On Monday, after months of tension and waiting, Wilson was finally cleared of all charges in the fatal shooting of teen Michael Brown — leaving him, essentially, a free man. A free man who could ostensibly go back to the same police department (which is currently still paying him his $45,300 salary), perhaps relegated to desk duties, but also potentially allowed to police the same streets that saw Brown shot dead this summer.

As unlikely as this scenario has seemed — considering the sweeping protests both after Brown's death and since the grand jury's decision, it feels nuts to imagine Wilson going back to life as usual on the force — talks of his quitting had, until this week, not been confirmed. And just two days ago, during his interview with George Stephanopoulos, Wilson said he hadn't decided.

“At first [his thinking] was, ‘I want to go back, I’m a cop, I want to still be a cop,’ ” his attorney, Danielle Thompson, told the Washington Post. “It took some time for him to realize that wasn’t exactly going to be what happened."

Clearly, though, Wilson eventually got the message. On Wednesday, his lawyers confirmed that Wilson would indeed be stepping down from the force. Said attorney Neil Bruntrager to CNN:

He is on paid leave right now, and there are discussions that are going forward with the department to separate from the department in an amicable fashion ... He can't go back to being a police officer, he knows that, there's no illusion about any of this. But it's the way in which he leaves, that's really important to him on a lot of different levels.

Over the last few days, demonstrations have erupted across the U.S. (and have even made their way across the pond the U.K.) in protest of racially charged police brutality, an issue that has been brought front and center not only because of the shooting of Michael Brown, but also John Crawford, Tamir Rice, and others. In Ferguson, the epicenter of the tension, a few dozen protesters stood outside the police headquarters on Wednesday night, but no incidents or arrests were reported.

Ferguson residents were no doubt hoping for sooner rather than later.