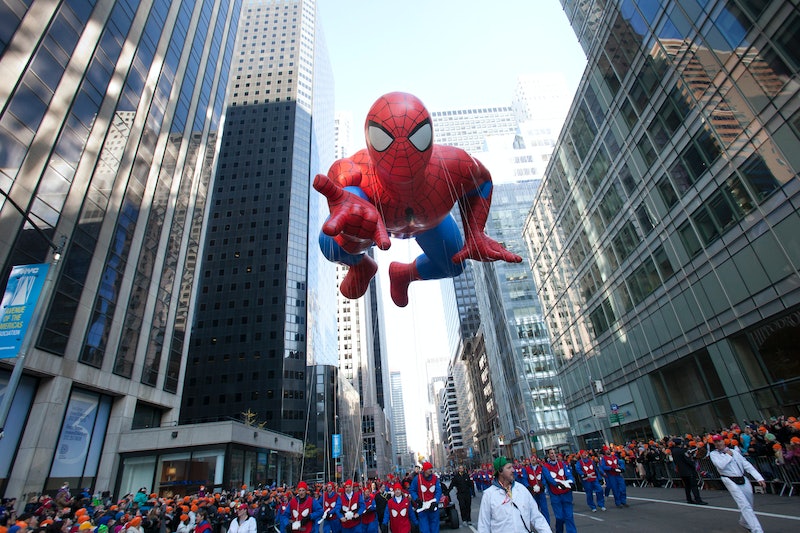 Ah, Thanksgiving. The time for uncomfortably drunken family reunions, painful food comas and, of course, the wonders — and controversies — of the Macy's Thanksgiving Day Parade. This year saw the return of the highly contentious Seaworld float and animal rights activists are not happy. In fact, they're so mad about it that PETA supporters crashed the Seaworld float during the parade (though very little actual damage was done).

For some, the parade is something to have on in the background as frantic last-minute meal prep is done; for others, sitting through the lip-syncing, the commentary and the (let's admit it, sometimes terrifying) floats is the tradition that makes the holiday. Now, that tradition is being threatened by controversy. This year, the parade is featuring celebrities like Hilary Duff, Mo'ne Davis, and Nick Jonas standing alongside much larger celebrities like Spiderman, Harold the Policeman and Paddington Bear. It's also bringing back a familiar (and cringe-worthy) site: the Seaworld float.

Last year, in honor of its 50th anniversary, Seaworld made its first ever appearance at Macy’s Parade with a float that included killer whales — you know, the same killer whales that were the stars of the documentary Blackfish, whose confinement in the parks have been implicated in a number of human deaths. It was a move that brought Macy's under under heavy criticism and did very little to rectify a growing PR disaster for Seaworld. I mean, how do you keep a family-friendly image when you're associated with manic, murderous killer whales?

Apparently, though, Seaworld decided they'd take another whack at it and bring out the controversial float this year, again featuring the happy (and, unfortunately, floating) orcas. Maybe they thought everyone — all 60 million people who've seen it — had forgotten about the depressing documentary, or maybe they thought, Hey, the float's already made and everything. As for the parade organizers, they've flatly refused to get involved — and that's in spite of PETA protests earlier this week outside of the Macy's offices in New York. Said Macy’s spokesman Orlando Veras in a statement last week:

The parade has never taken on, promoted or otherwise engaged in social commentary, political debate, or other forms of advocacy, no matter how worthy.

Both in the social media sphere and on the ground, activists were not pleased: Halfway through the parade, despite a heavy police presence, PETA supporters managed to momentarily crash the float.

Whether that'll deter Seaworld from reappearing next year? Hard to say. Watch the float being crashed below:

More like this
15 Black-Owned Liquor & Wine Brands To Add To Your Bar Cart
By Alexis Morillo
8 Charities To Donate To During Black History Month
By Alexis Morillo
These Artists Are Reimagining Black History Month To Create A Better Future
By Katie Mitchell
6 Organizations Fighting Police Brutality That You Can Support Right Now
By Syeda Khaula Saad and JR Thorpe
Get Even More From Bustle — Sign Up For The Newsletter
From hair trends to relationship advice, our daily newsletter has everything you need to sound like a person who’s on TikTok, even if you aren’t.