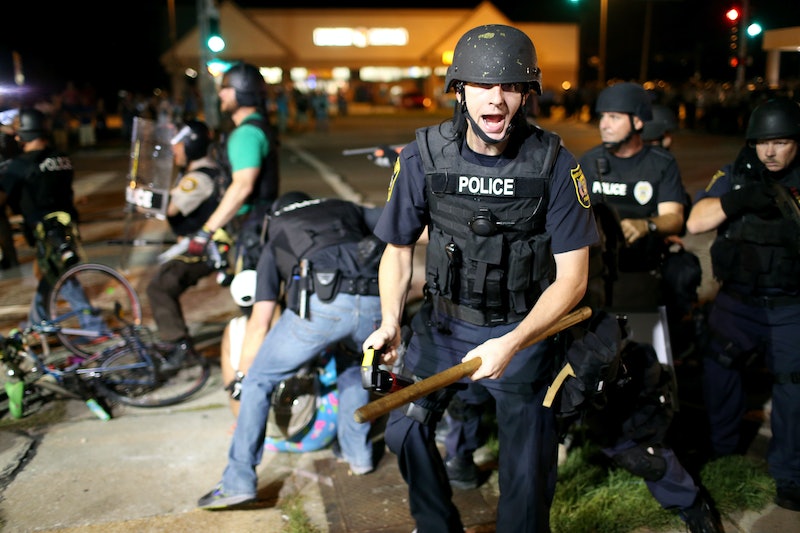 For many across the country, this Thanksgiving has been clouded by Ferguson and the grand jury's decision not to indict Officer Darren Wilson. Across news feeds and video screens, images of the violent protests that have since erupted have shown a nation frustrated and divided, scared and distrusting. Few images have managed to capture the heartbreak, though, like this photo of a white Portland cop hugging a black boy: it's crushing and heartwarming and hopeful, all at the same time. And it really says it all.

Earlier this week, Portland, Oregon was the scene of a large protest, one of the many that broke out after the grand jury's divisive — if unsurprising — decision to clear Wilson of all charges in the shooting of teen Michael Brown. Highways were closed, police barricades were erected, and seven people were arrested in the rally. It could've been a protest like any other, except that a photographer happened to catch a heartwarming moment: 12-year-old Devonte Hart tearfully embracing a Portland police officer.

According to The Oregonian, Hart had been courageously standing in front of the police barricade with a "free hugs" sign when Portland Police Sgt. Bret Barnum happened to see him. After talking for a little bit, Barnum asked him, "Do I get one of those?" and so they hugged. But that's not all — right before they embraced, Barnum apologized to Hart. As Hart's parents described it, in a Facebook post published the next day:

It was one of the most emotionally charged experiences I've had as a mother. He trembled holding a Free Hugs sign as he bravely stood alone in front of the police barricade. Tears rushing from his eyes and soaking his sweater, he gazed upon them not knowing how they would react. After a while, one of the officers approached him and extended his hand.

Their interaction was uncomfortable at first. There were generic questions about his favorite subject and what he liked to do in the summer, but the one that mattered hit straight to the heart. He asked Devonte why he was crying. His response about his concerns regarding the level of police brutality towards young black kids was met with an unexpected and seemingly authentic (to Devonte), "Yes. *sigh* I know. I'm sorry. I'm sorry." The officer then asked if he could have one of his hugs.

This is when freelance photographer Jonny Nguyen snapped the picture, right at this moment, with Hart's eyes full of tears and Barnum looking down, their arms around each other. No wonder the picture has gone viral, with over 150,000 shares or likes on Facebook, 4,000 retweets on Twitter and thousands of likes on the photographer's Instagram page.

I had a gut feeling there was something special about Devonte, so I stayed at the scene. Before I knew it, Sgt. Barnum was speaking to Devonte. That’s when I got the powerful image of them hugging. From there, I knew I had something special. Something that I wanted the world to see. A powerful message I wanted to communicate. As a photographer, you always have to trust your gut – your intuition. It’s your best tool.

It's a powerful message, but not because it's a white cop hugging a black kid. It's powerful because it shows how much went into that hug — the fear and the anger, but also just a kid standing quietly with a sign and a cop willing to ask questions. Images: Getty Images

More like this
Here’s Where The NHS Nurses’ Strike Currently Stands
By Sophie McEvoy
6 Organizations Fighting Police Brutality That You Can Support Right Now
By Syeda Khaula Saad and JR Thorpe
Kim Petras Just Made Grammy History
By Jake Viswanath
42 Black Owned Fashion & Beauty Brands To Support Today & Always
By Mekita Rivas, Shea Simmons, Kui Mwai and Dominique Norman
Get Even More From Bustle — Sign Up For The Newsletter
From hair trends to relationship advice, our daily newsletter has everything you need to sound like a person who’s on TikTok, even if you aren’t.