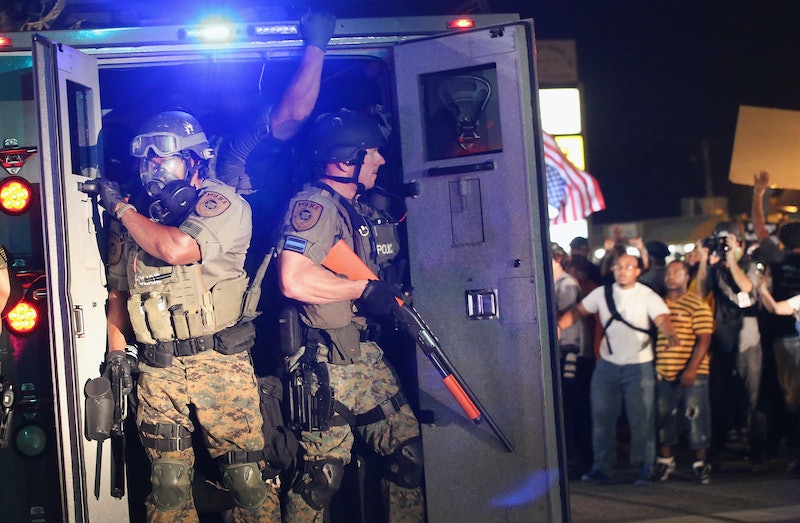 The tensions in Ferguson, Missouri have continued to boil over since the grand jury's decision to clear all charges against Officer Darren Wilson in the shooting of unarmed teen Michael Brown. Protests, looting and arrests have shaken St. Louis all week, and now, the first serious injury at the hands of the police is being reported: a pregnant St. Louis woman lost an eye after Ferguson police shot bean bag rounds at her car — even though she was allegedly doing absolutely nothing.

Here's how it went down: early Tuesday, hours after the grand jury decided not to indict Wilson, while demonstrations were breaking out in and around the St. Louis area, Dornella Conners and her boyfriend were parked at a gas station on New Halls Ferry Road, just north of Ferguson. The scene was chaotic: roughly 20 or 30 people had gathered at that gas station, and police reported some gunfire breaking out amongst the crowd as they moved in to clear out the area.

That's when it happened. According to Conner, her boyfriend, De’Angelas Lee, then tried to leave the parking lot and drive around the cops, but couldn't, because the police had blocked his car from all sides — the police then shot a non-lethal bean bag round (also known as a flexible baton round) at the car, shattering Conner's passenger-side window and blinding her in her eye. “I weren’t looting or anything. I was just out with my boyfriend. We were just riding around respecting Mike Brown,” Connor told KMOV.

According to her father, Donnell Conners, surgeons had to pull out roughly 20 pellets from her face and on Facebook, Dornella said she had to have her left eye completely removed. Her sight in her other eye has also been impaired.

Her father added to KMOV:

I’m very upset, very disappointed with tactics that they used trying to get control of the situation. I understand [they have a] tough job, I understand that it was chaos, but there was no reason to fire upon an innocent person sitting in a vehicle. How can a pregnant person in a car be causing chaos?

The police, of course, tell a different story. According to court documents quoted by the St.Louis Post-Dispatch, Lee was driving towards them, so aggressively so that the officer was afraid for his own life. In fact, the 21-year-old has been charged with second-degree assault on a law enforcement officer. Conners, though? She was just in the passenger's seat. And now she'll never see the same way again.

More like this
24 History-Making Black Women You Probably Didn't Learn About In School
By Ayana Lage and JR Thorpe
25 Inspiring Quotes From Black Women To Celebrate Black History Month
By Kyli Rodriguez-Cayro and JR Thorpe
6 Organizations Fighting Police Brutality That You Can Support Right Now
By Syeda Khaula Saad and JR Thorpe
Here’s Where The NHS Nurses’ Strike Currently Stands
By Sophie McEvoy
Get Even More From Bustle — Sign Up For The Newsletter
From hair trends to relationship advice, our daily newsletter has everything you need to sound like a person who’s on TikTok, even if you aren’t.