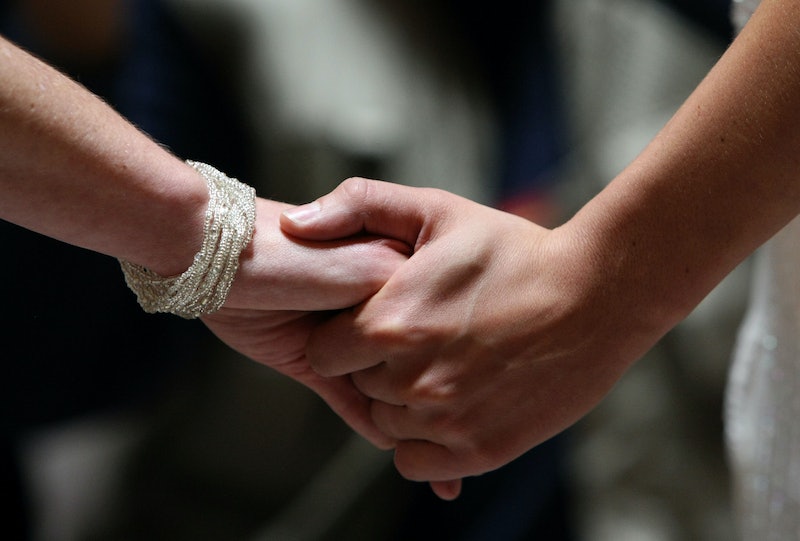 Finally joining the rest of the Nordic region, Finland legalized gay marriage on Friday, becoming the 13th state in the European Union to allow same-sex marriages. I know what you're thinking: Wait, gay marriage wasn't legal in Finland before? Surprisingly, it wasn't. And, as it happens, it very nearly stayed that way.

The battle for equality doesn't only rage in the southern states, it seems — even the beautiful and exemplary-seeming Nordic countries have their issues. Finland, as it turns out, has been behind the times for a while. On Friday, a "citizens' initiative" proposal to legalize gay marriage — which received a whopping 167,000 signatures — was finally put to a vote in the Finnish parliament. The bill passed, but only just: of the 200 members of parliament, 105 were for it, while a whopping 92 were against. (Perhaps unsurprising, consider the country only declassified homosexuality as an "illness" in the 1980s, according to Foreign Policy.)

The change in the law will have huge implications. Since 2002, gay couples in Finland have been allowed to enter into civil partnerships, but this has still excluded them from one very crucial freedom: adoption. Civil partnerships also didn't allow couple to share a surname — a small, but nonetheless meaningful — right. Now, thanks to the passing of the citizens' initiative bill, same-sex couples will finally have rights equal to their heterosexual counterparts.

Said Prime Minister Alexander Stubb, who openly supported the bill, in an open letter before the vote:

Finland should strive to become a society where discrimination does not exist, human rights are respected and two adults can marry regardless of their sexual orientation.

And just because half of parliament is behind the times, doesn't mean that the people are too. Nearly 6,000 Finnish men and women gathered in Helsinki's Citizens Square to hear the results of the vote, cheering and celebrating on hearing the announcement. As Silvia Modig, an openly gay member of parliament who voted for the proposal, put it :

I feel great. Even though I am openly homosexual, this was no personal mission to me. This was foremost an equal protection issue. We are now legalizing and recognizing something that already exists in the society.

Worryingly, though, Finland might not have reached the end of the marriage equality road just yet. The bill is set to become law in 2015, but the nationalist Finns Party — the main opposition party that staunchly opposes gay marriage as "damaging" — may try to throw out the legislation before it actually goes into effect.

More like this
Gen Z Are Twice As Likely To Identify As Queer, According To New Data
By Sam Ramsden
6 Organizations Fighting Police Brutality That You Can Support Right Now
By Syeda Khaula Saad and JR Thorpe
8 Charities To Donate To During Black History Month
By Alexis Morillo
These Artists Are Reimagining Black History Month To Create A Better Future
By Katie Mitchell
Get Even More From Bustle — Sign Up For The Newsletter
From hair trends to relationship advice, our daily newsletter has everything you need to sound like a person who’s on TikTok, even if you aren’t.