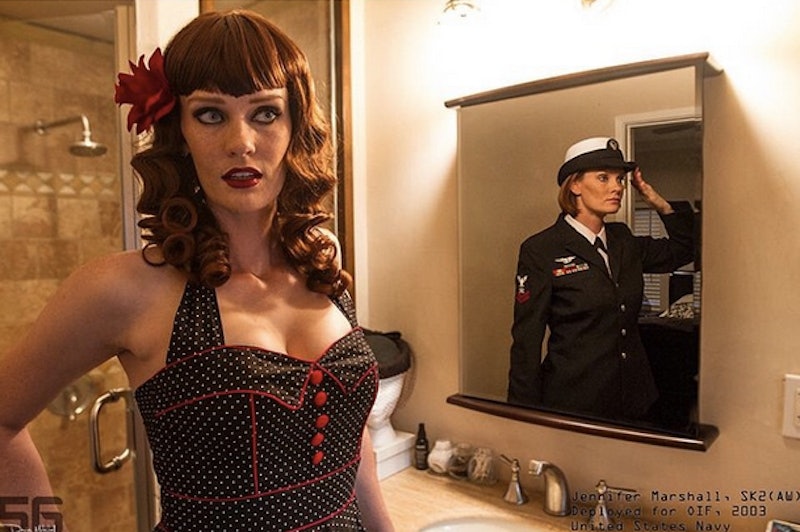 Memorial Day and Veterans Day take place every year to celebrate the contributions of the soldiers who dedicate their lives to protecting and serving their country. When we see them in uniform, you might hear a lone stranger say, "Thank you for your service." Often times, however, we see them in their respective uniforms and keep peddling by, forgetting the person behind the camouflage. Devin Mitchell has set out to change that with a photo essay of veterans outside of their uniforms.

Mitchell, a photographer and sociology student at ASU, created the Veteran Arts Project, which captures the double-sided stories of those in the military. Each subject is staged in front of a mirror, where their "human" side stands brushing her teeth or shaving his face, as the soldier that they have transitioned to daily intently stares back at them. YahooStyle says Mitchell fused the pictures together using Photoshop, which highlights "the double identity many veterans feel like they have to straddle." There is a photo of a Marine, who is transgendered, licking a machine gun; a photo of a gay couple hugging each other on the bathroom sink; a little girl, whose parents have been deployed three times, clad in her very own uniform; there's another whose legs were amputated. These images and many more from the project showcase not only the fight they endure for our country, but also the one they battle in maintaining their true selves (a battle many of us have faced even outside of the military). In interviewing his subjects, Mitchell says that the soldiers' transitions between their service and their personal lives boil down to three things: diversity, adversity, and triumph. These three characteristics are what he will have to remember as he embarks on completing his project.

The student's goal is to capture 10,000 images from around the nation, continuing to juxtapose the at-home experiences of soldiers to their lives in service. So far, 58 photos make up the project that is gaining a lot of popularity on Instagram. Commenters offer kudos to Mitchell for a job well done, and others, like some in passing, thank the soldiers for their service.