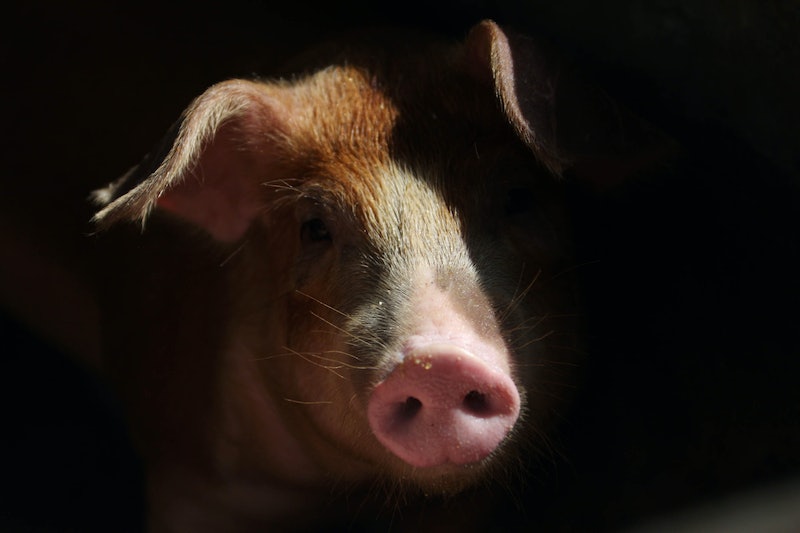 World, meet Mr. Pig. Mr. Pig (or so I've chosen to dub him, because we don't as of yet know his name) is large. He's brown. He has stomach issues. He's (apparently) emotionally supportive. And he nearly got to fly this week — unfortunately, though, this "emotional support" pig got kicked off the U.S. Airways flight before you could even say Babe. Better luck next time, my intestinally-challenged friend.

What exactly is an emotionally supportive pig, you might ask? I might ask the same thing. But one woman flying out of Connecticut on Friday claimed that that's what this animal was; an emotional support. As it turns out, you can take a variety of animals on board with you as emotional supports — the New York Post even lists miniature horses as an option, not to mention monkeys and cats. Who knew?

In fact, this law is part of the Air Carrier Access Act (itself tied in with the American Disabilities Act), a move to recognize service animals in public places. Under it, Emotional Support Animals — or ESAs, for people in the know — ride for free, and can sit with their owners without a cage or any other kind of confinement. And it can apply to anyone who needs the support of their pet (whatever their pet may be) during the flight.

As it turns out, though, pigs are not the best choice. Just as the woman and her 70 pound ESA pig went to get settled in their seats, the pig defecated in the aisle and began to run manically back and forth along the aisle, leaving the poor owner to clean up the mess. Said Jonathan Skolnik, a professor at the University of Massachusetts Amherst, who was seated next to the woman and her pet, to the AP:

[I thought it was a duffle bag.] It's no duffel bag but a rather stout PIG ... on a leash. Am I dreaming?

She tethered it to the arm rest next to me and started to deal with her stuff, but the pig was walking back and forth.I was terrified, because I was thinking I’m gonna be on the plane with the pig.

The woman and her pig were then asked to leave to plane, but not before someone snapped a picture of the unusual scene and sent it off to the social media sphere, where it proceeded to go viral, because who doesn't love the idea of a hog on a plane?

Surprisingly, this is a big issue for airlines. According to the New York Times, flight attendants will often let ESAs onto planes because they don't want to stir up trouble. As Marcie Davis, founder of International Assistance Dog Week, told the Times:

It’s becoming a big problem. I’ve seen people bring on pets and try to pass them off as an emotional support or service dog. It’s not appropriate and it’s not safe.

It's especially upsetting when they poop all over the aisle. Images: Getty Images

More like this
Picky Eater? Sensitive Stomach? This Vet Nutritionist-Designed Dog Food Has A Plan For That
By Maria Cassano
The 5 Best Blankets For Puppies
By Jenny White
How To Help Those Affected By The Turkey-Syria Earthquake
By El Hunt
Ozzie’s Coming Out Scene With Kitty On 'That ’90s Show' Has Twitter Sobbing
By Brad Witter
Get Even More From Bustle — Sign Up For The Newsletter
From hair trends to relationship advice, our daily newsletter has everything you need to sound like a person who’s on TikTok, even if you aren’t.