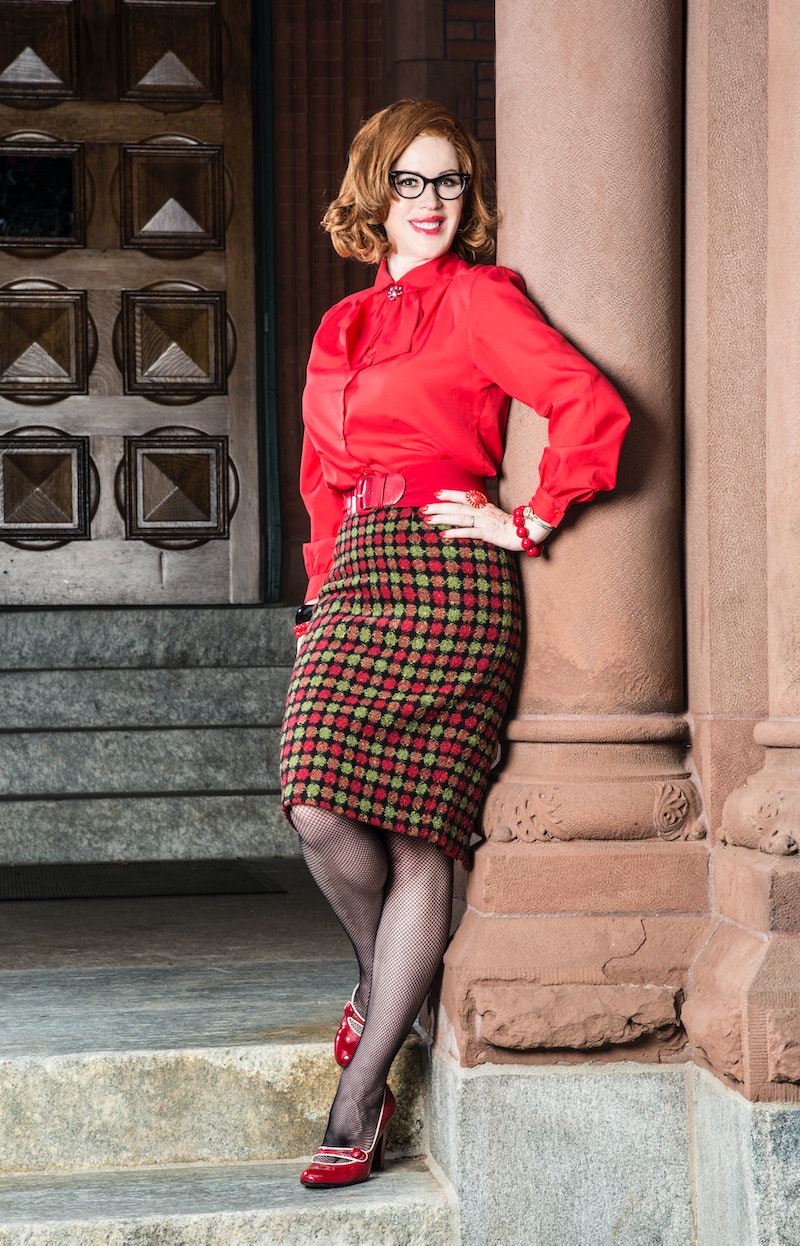 Molly Ringwald — that name brings up so many favorite movies and memorable moments for '80s kids and nostalgia-loving enthusiasts of the era. Her prom dress in Pretty in Pink. Her hopeless crush on Jake Ryan in Sixteen Candles. Her pampered princess character in The Breakfast Club. Now in 2014, Ringwald is returning to high school — this time, as a teacher — in Wishin' & Hopin' , premiering Saturday night on Lifetime. Ringwald plays eccentric substitute teacher Madame Frechette (who also happens to be French) at Felix Funicello's Catholic school. But just so you know, Ringwald has been very busy since the '80s with roles in movie and TV, as well as singing jazz. Yep, jazz.

Ringwald is actually fluent in French and left for France to star in some French films during the mid-1990s, making her the perfect choice for the Wishin' and Hopin' role. Ringwald also starred in a number of TV movies during the '90s, including the miniseries Stephen King's The Stand and Something to Live for: The Alison Gertz Story. But as time moved on, so did Ringwald's career to even bigger things. Here are some of the things she's known for recently.

Returning to the Teen Genre — As an Adult

Ringwald made a triumphant return to the teen genre in the feature spoof film Not Another Teen Movie. She had a cameo in the movie and it earned her an MTV Movie Award nomination. A few years later, she starred opposite Shailene Woodley in ABC Family's drama series The Secret Life of the American Teenager. Ringwald played the mother to Woodley's pregnant 15-year-old and also sang the theme song, "Let's Do It, Let's Fall in Love." The series ran from 2008 until 2013.

In 2013, Ringwald released a jazz album called Except Sometimes, which was heavily influenced by her father, jazz pianist Bob Ringwald. "Beginning at around age three I started singing with his band and jazz music has continued to be one of my three passions along with acting and writing. I like to say jazz music is my musical equivalent of comfort food. It’s always where I go back to when I want to feel grounded,” she said in a statement about the record.

The last track on the album is a cover of Simple Minds' "Don't You (Forget About Me)" from The Breakfast Club.

Jem and the Holograms: The Movie

Ringwald also hopped on the current '80s nostalgia train and has a part in the upcoming Jem movie, starring Nashville's Aubrey Peeples and Juliette Lewis. Ringwald's exact role hasn't been revealed, but I'm sure it's worth waiting for — just like the truly outrageous movie itself.

"I feel extremely honored to have an icon like Molly Ringwald be part of our Jem and the Holograms movie," director Jon M. Chu told People . "Not only is she stunning, but she represents a generation of strong women leaders which is exactly what our Jem is all about."