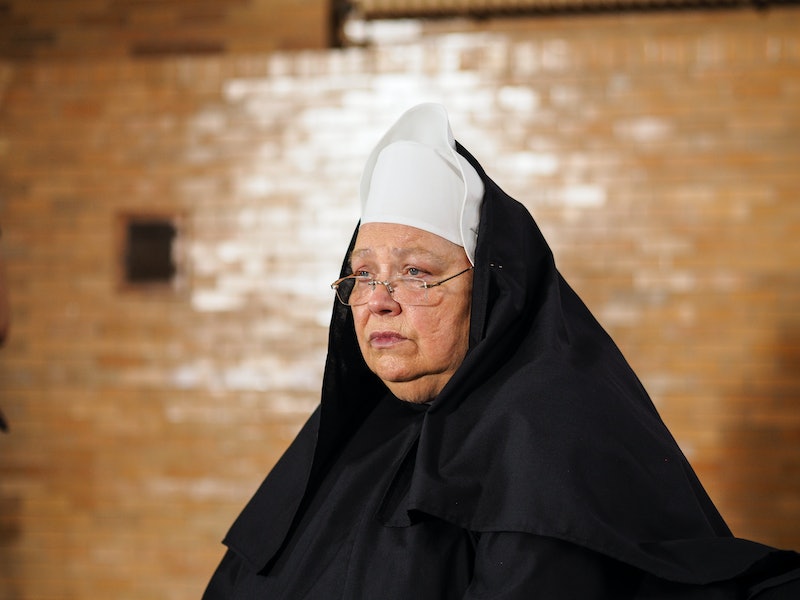 Some superstars are just instantly recognizable — Brad Pitt, George Clooney, Angelina Jolie. You'd know it was them from miles away. But then there are some great actors and actresses you totally know the face of — you've seen them in so many things — but you never quite knew their name. You just know either their previous characters or work, but never placed their name in the credits. I had the same reaction the second Conchata Ferrell pops up in Wishin' and Hopin' , premiering Saturday night on Lifetime. I totally knew her from something else I've seen, but I had no idea what. As it turns out, Ferrell has been in everything, including big blockbuster films, theater, and television.

The 71-year-old West Virginia native is an Emmy-nominated actress probably best known for her longtime role as housekeeper Berta on the CBS sitcom Two and a Half-Men. She was nominated for an Emmy for the supporting actress part in 2005 and 2007. The character actress also received an Emmy nod in 1992 for playing Susan Bloom on the David E. Kelly drama L.A. Law. Since then, Ferrell has made quite a career of memorable roles, both small and large.

As part of the Off-Broadway Circle Repertory Company, Ferrell played April Green the original cast of Lanford Wilson's The Hot L Baltimore in 1973. Norman Lear went on to adapt the play as a short-lived ABC sitcom in 1975 and he kept Ferrell in the cast as April. "It’s almost 40 years ago that we did Hot L Baltimore, but it was, for most of us, the best time of our lives," she told The A.V. Club. "April turned out to be maybe the best friend I ever had, because I found things in me that I had no idea were there, and it was just something Lanford wanted to see me do. She’s my favorite of all time, and there’s a little bit of her in just about every character I do."

She also won Drama Desk and Obie awards for appearing in the off-Broadway play The Sea Horse.

Ferrell has had supporting roles in so many big movies. You (and I) probably know her from her supporting characters in the feature films Network, Edward Scissorhands, Erin Brockovich, Crime and Punishment in Suburbia, Mr. Deeds, and K-PAX, as well as a small part in True Romance.

"My second film was Network, and just because I was surrounded by who I was surrounded with," she told The A.V. Club. "I mean, I sat next to Paddy Chavefsky!—all of that was amazing for me."

Ferrell is also known for her small screen appearances. In addition to playing Berta on Two and a Half Men, she's had parts on Friends, Buffy the Vampire Slayer, Teen Angel, Matlock, Good Times, Hearts Afire, Night Court, and more.

"I love acting better than anything, and I do it better than anything else I do," she told The A.V. Club. "I love what I do. And I don’t plan to retire. The business will just have to stop hiring me, or my body will abandon me, but either way I will work as long as I can work."

More like this
12 ’90s Movie References You Missed In 'Do Revenge'
By Radhika Menon
Harry Potter's Viktor Krum Has Undergone A Huge Transformation Since Hogwarts
By Sam Ramsden and Meguire Hennes
10 Stranger Things-Inspired Halloween Costumes For True Fans
By Emma Carey
What Does Nancy Jo Sales Think Of 'The Real Bling Ring'?
By Arya Roshanian
Get Even More From Bustle — Sign Up For The Newsletter