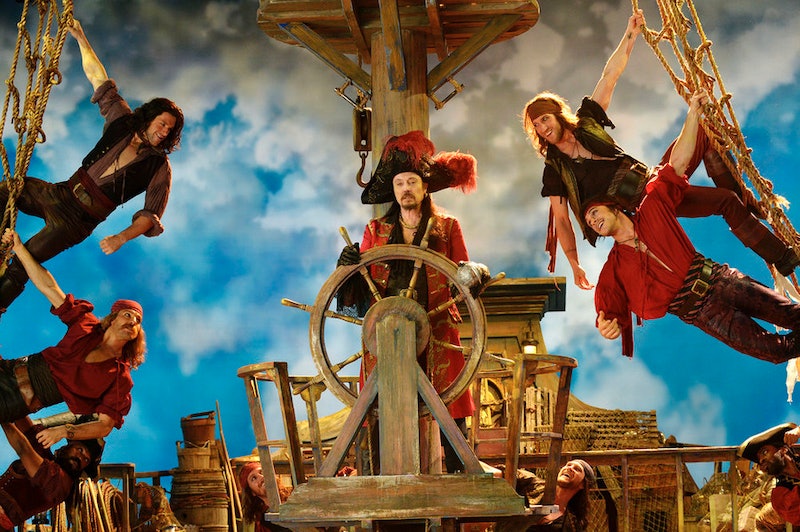 I know it and you know it, too — you're excited to tune in to watch NBC's holiday musical extravaganza Peter Pan Live! And just like that exclamation point indicates, Peter Pan Live! will premiere Thursday night and indeed be broadcast live from a sound stage in Long Island, N.Y., with Girls actress Allison Williams playing the title role and Christopher Walken as Neverland nemesis Captain Hook. They'll be surrounded by a cast of Broadway alums like Christian Borle, Kelli O'Hara, and more. Much like last year's musical special The Sound of Music Live! (and every episode of Scandal), there will be live-tweets galore. But if you only have your computer and don't have TV access, it'll be hard to watch Peter Pan Live! live, but it can be done online.

It sucks to be a cord-cutter without cable/broadcast TV or to be a West Coaster — neither will get the special 100 percent live. For the West Coast, NBC will just be re-airing the East Coast feed three hours later (story of my life living in the Pacific Time Zone). But come on, it's 2014 and technology allows us to buy whatever we want on Amazon and update Facebook while on airplanes. If that stuff can be done, we can all certainly find a way to stream Peter Pan Live! live — and online.

Stream It Through Your TV Provider

See, comedian Sarah Silverman had the same question we all had — and she got an answer from Peter Pan Live! exec producer Craig Zadan himself. In this case, Silverman wanted to see the East Coast feed on the West Coast, but Zadan's answer is still valid no matter where you live — many cable providers let their subscribers stream programming live online.

If you can't watch it live, you might be able to DVR it or on-demand it for later, if your service includes those perks. You're paying the big bucks for it, after all.

Stream Illegally in Dark Corners of the Internet

Look, I'm not saying it's OK or even telling you to do this, but if you really, really want to see Peter Pan Live! on Thursday night and live-tweet it with the best of 'em, there could be a way. I'm not saying there definitely will be one, but there might be a free stream somewhere on the internet, if you look hard enough and use the right Google search terms.

You could try it, but don't hold me responsible for the weird shit any of those websites will download onto your precious computer.

Watch It the Next Day on NBC and Hulu

If you can about 12 hours (give or take), Peter Pan Live! will most likely be available to watch on NBC.com and Hulu on Dec. 5. Yeah, that's the next day after it airs. I know that's not as captivating as watching it live and waiting to see if anyone falls while singing and flying in the air — and on these streams, NBC just might edit stuff out — but hey, at least it's an option, right?

More like this
Jason Derulo Is Launching A New Singing Show In The UK
By Maxine Harrison
18 Years After 'American' Idol, Jennifer Hudson & Simon Cowell Reunited On Her Talk Show
By Radhika Menon
What’s New On Netflix: Ana De Armas’ 'Blonde' & A Nick Kroll Special
By Arya Roshanian
What’s New On Netflix: Meet 'The Real Bling Ring'
By Arya Roshanian
Get Even More From Bustle — Sign Up For The Newsletter