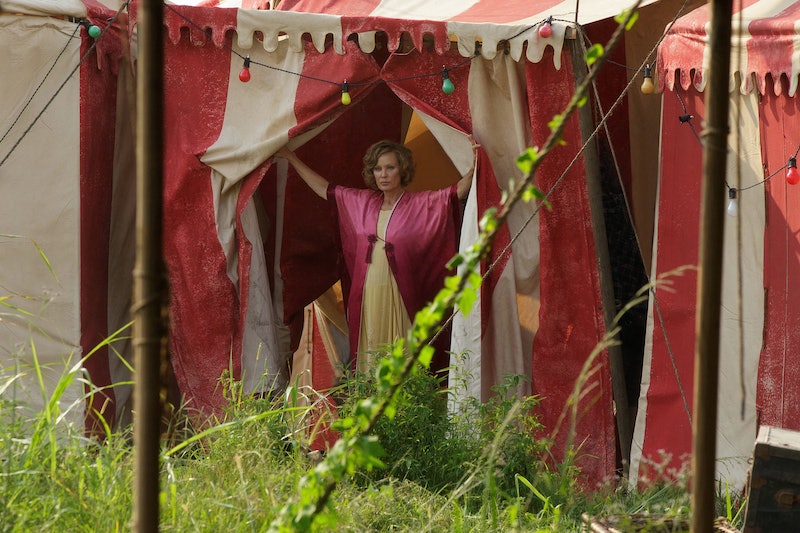 Jessica Lange as Elsa Mars in American Horror Story: Freak Show is an acting triumph — but just because I adore Lange does not mean I adore the actions of her manipulative character. Elsa has done some terrible things over the course of the season, much of which begs the question: is Elsa on AHS evil?

I think calling Elsa pure evil is an oversimplification — but saying she is just misguided is a gross understatement. Elsa is delusional, controlling, and vain. There are a couple times that I have felt sympathetic to her — like when she was faced directly by death (in the form of Edward Mordrake). But she only became genuine when she was confronted with her mortality.

Deep down inside Elsa may have some self-awareness (and thus some self-loathing) that the only way she can be on stage singing is to lead the freak show. That also makes her a bit empathetic (or perhaps just pathetic) and Elsa's past as a victim of torture porn also makes me feel bad for her. Yet, Elsa's troubled past is the root of a lot of her evil actions. Most of the really horrific things she has done have been to either keep her delusional dream of becoming famous alive... or to cover up for something else awful she has done. So let's look at the times that Elsa was the most evil.

How She "Saves" the "Freaks"

Although this may not be considered pure evil, it's morally corrupt. We haven't seen exactly how all of the performers have come to join the show, but I can say with 100 percent confidence that Elsa benefitted from their bad fortune. She takes in people who have very few other places to go, uses them as a way to get paying customers in the door, makes them perform (although apparently not often), and then acts like she's the star of the show. Although some people (like Ethel) may genuinely appreciate Elsa, I think most of the group has been tricked into thinking Elsa has saved them based on their lack of options. (Plus, Elsa killed Ethel! One of the only people who truly cared for her.) Her actions make them feel like they depend on her and it makes her act like they owe her something. But all that creates is a cruel, Elsa-dominated camp. Take, for example, conjoined twins Dot and Bette: Elsa (and Jimmy) did save them from being convicted of murder, but she only brought the girls on to get publicity for the show... and her own act. And when the girls actually showed talent, she resented them tremendously.

When She Sold Dot & Bette to Dandy

Speaking of resenting the twins, Elsa did one of her more heinous moves out of insane jealousy for them. When Stanley showed interest in the girls (not realizing that his intentions were also completely evil), Elsa betrayed them and sold them to Dandy. She is so delusional that she thought with them out of the way that Stanley would really give her a TV show. (Delusional. And evil.) Any person with a pulse can detect that something is not quite right about the dynamic between Dandy and his mother Gloria and the fact that Elsa didn't tell anyone else from the show what she did meant she knew it was wrong. (And in general, selling human beings is on my list of evil behavior.) Lucky for the twins, Dandy was on some of his best (although always, always creeptastic) behavior, so he didn't do anything too terrible to them.

When She Stabbed Paul

After viewers discovered Elsa was sleeping with Paul, we also saw Paul was sleeping with candy striper Penny. Unfortunately for Paul, Elsa figured that out too and got super jealous (I'm detecting a pattern here). But that wasn't all Paul did to get on Elsa's shit list — Paul was the one who brought up how guilty Elsa seemed to be in the disappearance of the twins. When the group confronted her about it, she became outrageously defensive and demanded that someone volunteer for her spinning wheel knife throwing act. Paul sacrificed himself and after missing him a couple times, Elsa ended up stabbing him. The fact that we know she can miss and how happy she looked after she hit him seems like it was no accident.

...And When She Didn't Call the Doctor For Paul

And if you weren't completely sold on the fact that Elsa intentionally hit Paul with the knife, the fact that she never called a doctor is definitive proof. Instead of getting him help, she just gave him some of her morphine to dull the pain. As of now, Paul is still alive (good thing Penny is a candy striper?), but Elsa's cruel retaliation to someone speaking the truth about her (and someone knocking her ego down a few begs) show how evil she can truly be.

Now just because Elsa is currently on my evil list doesn't mean that she may not redeem herself. Yet, something (let's call it "experience") tells me Elsa will never be the one to sacrifice herself for anyone else. I mean I understood why she killed Ethel (Ethel was going to kill her after all), so that could have been a simple case of self-defense. But the way she covered it up and joined forces with Stanley does not make me confident that we'll see any redemption that makes up for all her past sins.

More like this
In Elizabeth Strout’s Novels, The World Changes But People Stay The Same
By Morgan Leigh Davies
At 28, Melanie C Was Falling In Love & Reclaiming Her Confidence
By Olivia-Anne Cleary
'The White Lotus' Season 2 Trailer Teases Multiple Affairs & Another Dead Body
By Bustle Editors
Friend Of The Family Kidnapper Robert Berchtold Saw Jan Broberg Again In 2004
By Brad Witter
Get Even More From Bustle — Sign Up For The Newsletter