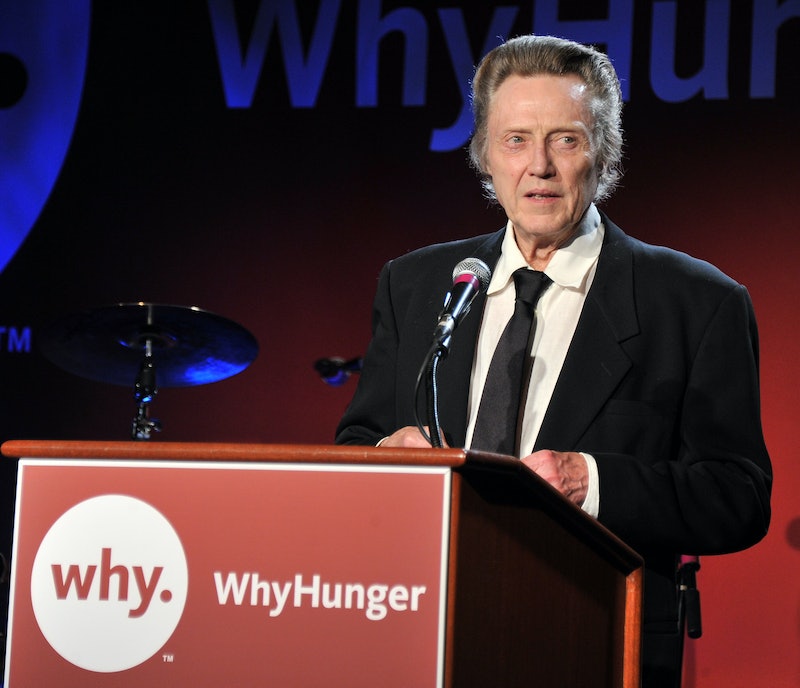 Christopher Walken is known for his eccentricity, so people shouldn't have been too surprised when he was named as Captain Hook in NBC's Peter Pan Live! But if you're relatively familiar with Walken's filmography, you may be wondering — since when does Christopher Walken sing? Now it is a pretty well-known fact that Walken is a competent dancer — partly in thanks to Fatboy Slim's 2001 video for "Weapon of Choice" and the movie musical Pennies in Heaven. And it turns out he has been dancing — and singing — since he was child. According to an Entertainment Weekly article, Walken has been involved in the musical world since around the age of 7.

In fact, in a featurette for TCM about Gene Kelly, Walken said,

When I was a kid starting out in show business, you had to be what was known as a triple threat. That meant you wanted to be able to dance, sing, and handle dialogue.

Walken was talking about Kelly (who was the master of movie-musical dancing), but Walken himself has successfully reached triple threat status. He told the New York Post about Peter Pan Live! , "When they asked me to do it, I said, 'I’m not much of a singer. But I can dance a little bit' . . . My singing is not much." Although Walken may be modest about his talents, there is hard proof of his skills. His background may be primarily dance — but it's nearly impossible to make it far in the musical world without being able to carry a tune. And Walken can in fact sing (even if he is not a world-class vocalist).

So, how did he get where he is now? After working in variety shows as a child, he ended up going to college, but dropped out when he was cast in the off-Broadway revival of Best Foot Forward , opposite Liza Minnelli in 1963. He worked as a backup dancer and singer for Monique Van Vooren (who is the person who told him to change his name from Ronald to Christopher). And he was in a tour of West Side Story as Riff (swoon!) where he met his wife Georgianne.

So Walken can play it cool all he wants (he is the epitome of a cool guy), but we know he's got the goods. His speaking cadence and his body movements are almost musical in themselves, so of course he can sing! And if you can't wait to hear his voice in Peter Pan Live! on Dec. 4 at 8 p.m., here are some other clips showing his chops:

This video shows Walken singing the classic George Gershwin standard "They Can't Take That Away from Me" live. So, we know that him singing live as Captain Hook should be no problem.

Walken played opposite of John Travolta's Edna in 2007's Hairspray. As the adorable Wilbur Turnblad who owns a joke shop, he performed "(You're) Timeless To Me" where he got to show off his singing and dance skills.

OK. I guess this doesn't technically count as singing, but it's too good not to watch Walken tackle Lady Gaga's "Poker Face."

Since Walken has proven he can master dramas, comedies, musicals — and spoken word, I have no doubt he'll be able to strut his stuff all over on live TV.

More like this
Everything You Need To Know About ‘Black Panther: Wakanda Forever’
By Bustle Editors
Christian Bale Sang With Taylor Swift & His Daughter Can't Believe It
By Radhika Menon
Kesha Is Down To Be The Next Bachelorette
By Jake Viswanath
Everything To Know About Taylor Swift’s 10th Studio Album, 'Midnights'
By Grace Wehniainen and Jake Viswanath
Get Even More From Bustle — Sign Up For The Newsletter