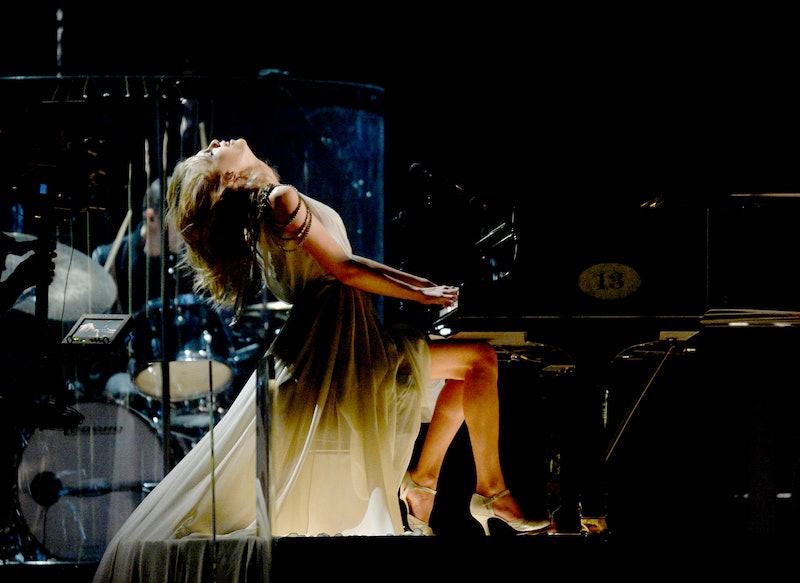 It's the time of year again, music lovers — the time for Beyoncé to steal the stage and for Taylor Swift to dance, awkwardly and uncontrollably, to your favorite songs. Yes, the age old question, "What's the difference between Song of the Year and Record of the Year?" is back up for contemplation because it's Grammy season. The Recording Academy has yet to announce the 57th Annual Grammy Awards nominees, but obviously we're already wondering when the big show will be. Well, here you are — the 2015 Grammys will air on Feb. 8, 2015 on CBS. I know, it's still two months away and you're probably upset that 1989 doesn't qualify for any awards, but it's never too early to get excited about the Grammys.

Or rather, it's never too early to get excited about what will hopefully happen at the 2015 Grammys. Because, if I can't look forward to Taylor Swift sweeping every category she's nominated in (unfortunately, 1989 was released after the deadline had already passed), I have to move onto my other favorite parts of what's sure to be a lengthy Grammys telecast. Which are, obviously, the performances that frequently overshadow the awards themselves and whenever a presenter flubs their teleprompter lines. (I know it's not nice to find that amusing, but usually I'm laughing with them, so it's fine.)

With that being said and with little knowledge of what we're in for when the 2015 Grammys, here are 5 things we should all be looking forward to come Feb. 8.

It just never gets old.

I can't be the only person who's STILL not sick of hearing/seeing this song performed, am I?

If Blue Ivy can show up at the VMAs, North West can show up for the Grammys. Just saying.

For One Direction to Win All of the Awards

Imma let you finish, but Midnight Memories was a great album.

For Someone to Announce a Reunion Tour

Justin Timberlake and *NSYNC? Beyoncé and Destiny's Child? The Spice Girls? Honestly, even 98 Degrees would be fine as long as I've got something to be excited for.

More like this
'School Of Rock' Changed Joe Keery's Life Forever
By Alyssa Lapid
Everything To Know About Taylor Swift’s 10th Studio Album, 'Midnights'
By Grace Wehniainen and Jake Viswanath
Twitter Is Freaking Out Over Rihanna’s 2023 Super Bowl Halftime Show Announcement
By Stephanie Topacio Long
What Demi Lovato Really Thinks About Child Stardom, Depression, & Sobriety
By Radhika Menon
Get Even More From Bustle — Sign Up For The Newsletter