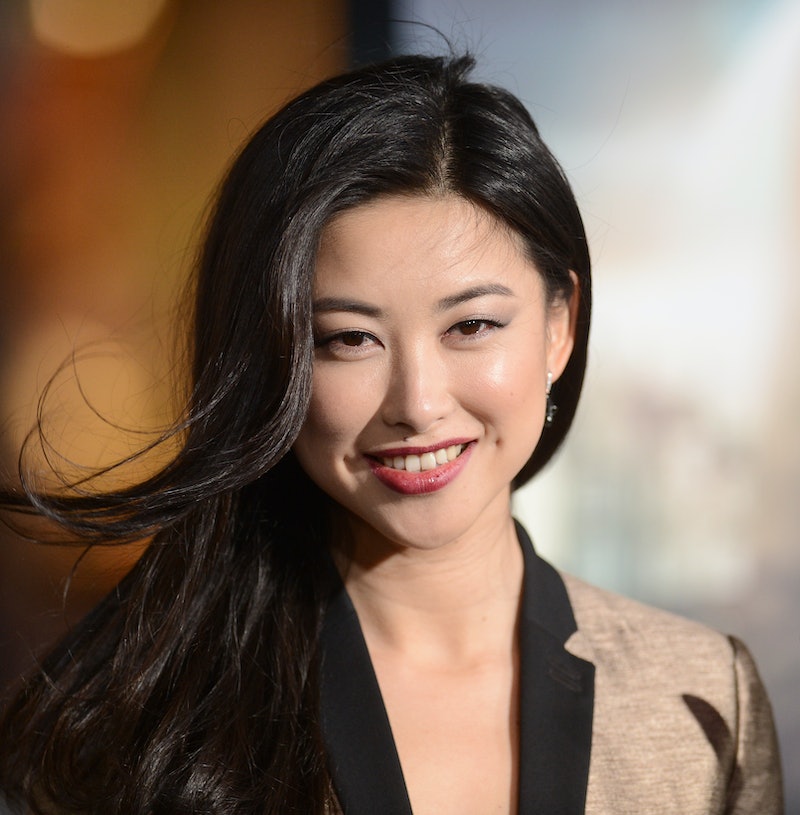 Still mourning the loss of Xena: Warrior Princess? Good news: there's a fierce new warrior princess coming to Netflix this December. Claudia Kim plays Khutulun, renowned fighter, legendary badass, and "one of the most powerful women who ever existed," Kim says of her character in the new Netflix originally series Marco Polo . Like a real-life Xena, the historical Khutulun was known for her sharp wit, physical strength and notoriety as an undefeated fighter throughout the kingdom of Kublai Khan in 13th century China. Her super-strength? No man could ever defeat her. "She's not intimidated by men at all," Kim tells Bustle of her character. "Her strength is subtle."

The 29-year-old actress says she underwent intense training for her role as Khutulun, practicing hours of sword fighting, wrestling, and judo every day so she could master the physicality of her characters' high-energy action sequences, while simultaneously filming Avengers: Age of Ultron. Fellow Marco Polo star, Chinese actress Zhu Zhu (Cloud Atlas) who plays Kokachin, princess of a conquered Mongol tribe and Marco Polo's love interest, tells me she started training in archery and horseback riding everyday for two months before shooting the series in Malaysia.

If everything you know about the historical Marco Polo is something about bringing noodles to Italy or the game you used to play in the pool, consider this a crash course. In the ten-episode drama, Marco Polo follows the 13th century Italian explorer, played by the ridiculously good-looking Lorenzo Richelmy, and his adventures in the court of Mongol emperor Kublai Khan’s court. After his father sells him to the Khan in exchange for access to the Silk Road trade route, Marco Polo must learn to survive as a slave of the power-hungry Khan (Benedict Wong), and navigate a new way of life amongst bitter blood feuds and ancient rivalries.

And you thought history was boring.

Kim, Chen, and Zhou Zhou play three of the most powerful women in history, who Chen says played crucial roles in the culture and politics of the day. She did some research on the historical figure that inspired her character and learned: "the mongol women were very valued... that gives me the confidence that Chabi is equal to her emperor."

Kim agrees that "Mongol women were very powerful back in those days," adding that, at the time of Marco Polo's travels in Asia, the women of Mongolia were renowned for their strength and freedom of expression.

Kim, pictured above, tells me that, though the intensive physical training required to play Khutulun has been incredibly challenging, the experience has been an empowering one. She says playing Khutulun "really helped me grow, not just as an actress but as a woman. I didn’t think I could carry such energy. It’s such a privilege to be doing this." For Kim, learning to play a legendary historical character of mythical proportions like Khutulun, who Kim says is thought to be the inspiration for Giacomo Puccini's opera Turandot, was about "fitting in her shoes" and connecting her character on a personal level. "She's not just a warrior princess," Kim adds.

Zhu Zhu says she also spent time getting to know her character, doing research of her own on the historical Kokachin. After she finished shooting Marco Polo, Zhu Zhu tells me she traveled to the Basilica of San Lorenzo in Florence and visited the grave of Marco Polo. Zhu Zhu says her journey helped her find a greater point of connection to the real Kokachin and the story of Marco Polo "after 700 years" of history. During her visit, Zhu Zhu reflected on the challenges of mastering an incredibly physically demanding role while learning to speak English for a major role. Though Zhu Zhu admits this was "quite difficult," she came away from the role with a greater sense of confidence in her abilities. "I don’t think there’s anything that stands out that I couldn’t conquer," Zhu Zhu tells me, "my mind was quite peaceful."

Marco Polo was practically made for holiday binge-watching, and all ten episodes will be available for Netflix streaming on December 12.