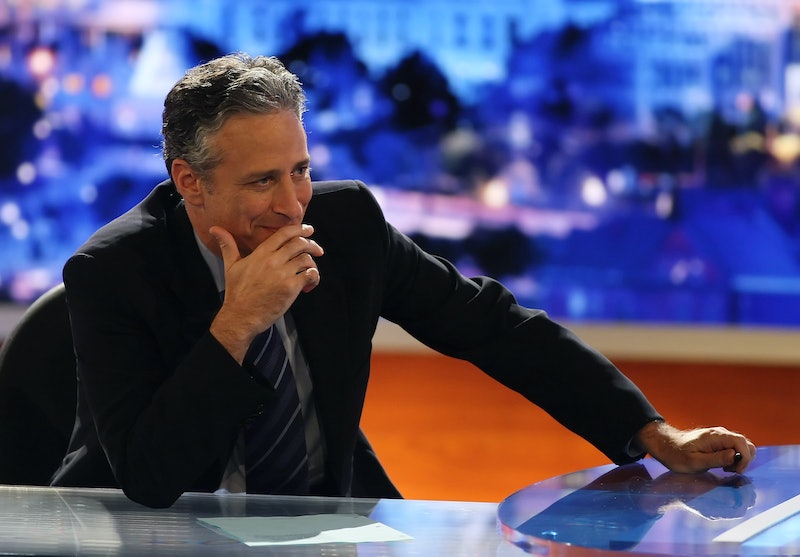 The Daily Show with Jon Stewart tirelessly informs takes the news and distills it into humorous, digestible, and well-produced chunks day in and day out, usually without interruption. But twice a year, The Daily Show takes a hiatus so the cast of correspondents and crew of amazing writers can get a chance to relax and recharge their satirical batteries. One hiatus usually comes mid-summer, and the other is actually coming up in just a few weeks — The Daily Show winter break is from Dec. 17 - Jan. 2015, so get ready for about a month without your favorite way to keep up with the news. I know, it won't be easy.

And if you're confident that you'll be able to make it through a month without The Daily Show? Well, don't get too cocky, because when it does return, it will no longer be paired with The Colbert Report. Yep, Colbert is leaving Comedy Central on Dec. 18 — in his place, Larry Wilmore will be Stewart's timeslot partner, with the newly retitled Nightly Show.

If you're not sure where you're going to get your comedy-tinged news with Jon off the air, there are plenty of other places to get a laugh and learn something about what's going on in the world.

Check Out Their Other Work Online

While Stewart isn't a Twitter user, lots of his staff are active online. Jessica Williams is always hilarious on Twitter, where she shares not just jokes, but also places you can see her perform live and commentary on current events. Get to know newbie Jordan Klepper by watching the web series he did with his now-wife about being engaged called, appropriately, "Engaged."

Even the Daily Show writing staff is busy with other projects. Current head writer Elliott Kalan hosts The Flop House Podcast, where he lampoons bad recent movies (think Drive Angry or The Ugly Truth). I will never miss an opportunity to plug that podcast — it distills all of the wit of TDS into an hour of pop culture riffing that can make anything hilarious, even Gerard Butler movies.

Prepare Yourself for The Nightly Show

While Larry Wilmore won't be on the air until 2015 when The Daily Show returns, you could spend the time while neither show is on the air and relive Wilmore's greatest pieces as a Daily Show correspondent.

Or You Could Just Watch the Real News

I mean, people will still get the news over Daily Show's winter break. Brian Williams' NBC Nightly News isn't taking a month-long hiatus. But… it won't be the same.

More like this
Glenda Cleveland Died 2 Decades After Trying To Turn In Neighbor Jeffrey Dahmer
By Brad Witter
Mel C Wants You To Know That Margaret Thatcher Wasn’t A Spice Girl
By Darshita Goyal
Here’s Everything You Need To Know About Operation London Bridge
By Bustle UK
'Grey's Anatomy's New Intern Got Advice From Dr. Bailey Herself
By Grace Wehniainen
Get Even More From Bustle — Sign Up For The Newsletter