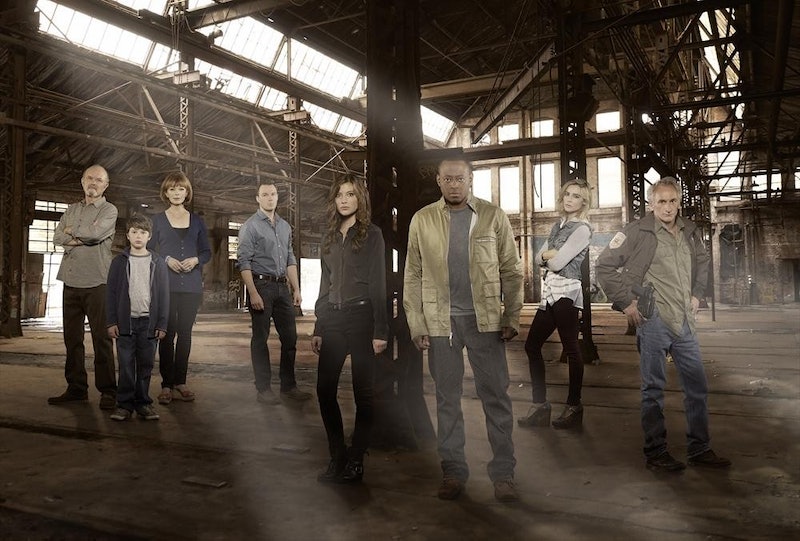 Let me apologize for all of the Resurrection puns that will be made from here on out, but when a show called Resurrection is in talks of being canceled, it's hard to avoid. Season 2 of Resurrection , which started in September continuing the storyline from the eight-episode first season, finally started to answer some of the most head-scratching questions viewers had after Season 1. But with time, the show has just created more questions for viewers, and with the fall finale set for Dec. 7, we are sure to be left on a crazy cliffhanger. But if the show is canceled — and not brought back to life — we may never know what the future for the residents of Arcadia has in store. So will Resurrection return after the midseason finale to give us at least some answers?

According to Zap2It, and cancellation predictors like Cancellation Bear — who predicts failing shows based on ratings — Resurrection is "certain to be canceled" based on its low ratings since Season 2 began. Like other ABC shows that have subsequently been canceled because of low-ratings (Selfie, Manhattan Love Story), it is possible that Resurrection will complete its fall run and be laid to rest.

Resurrection will end its fall run on Dec. 7 with it's ninth episode. With the virus running rampant in Arcadia, the future of the Returned is a toss up. Maggie learns that the reason Rachael has been able to beat the virus is because of her pregnancy, so maybe Maggie will discover the cure to help save the others. The Nov. 30 episode left viewers on a huge cliffhanger, with Pastor Tom dead after a violent hate crime brought on by the True Living group. Due to the concept of the show, it seems very possible that he will become one of the Returned.

If the show does return, it is set to come back in early January. Most shows on the network are set to come back late January, but shows like Castle, Revenge, and Resurrection (if it does survive) will be back earlier in the month. There is no set date, as of now, for the return of the show, which sets off a little bit of a red flag in my mind, since the big hitters of the network seem to have their return dates announced already.

If any show has proved that something dead can come back to life as a "Returned," it's Resurrection. Let's hope that art can imitate life and Resurrection will return in the winter premiere season.