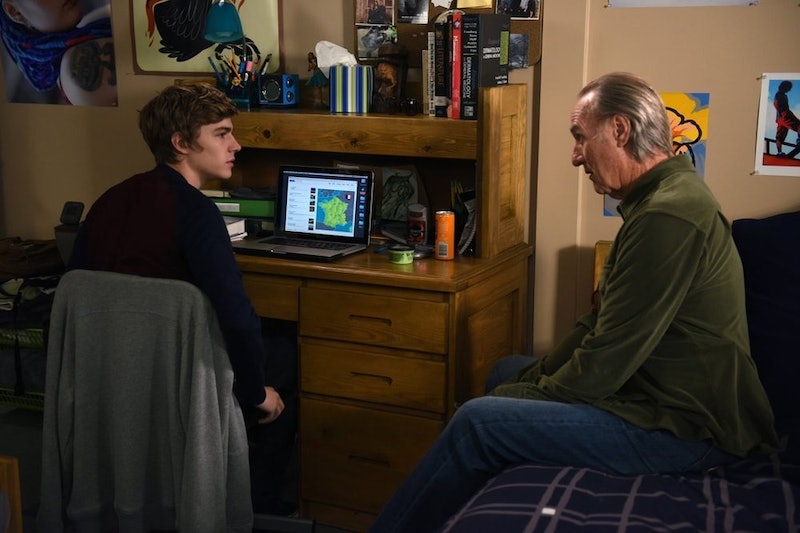 If you flipped to NBC on Thanksgiving, hoping to catch up on what promised to be a super emotional episode of Parenthood, you were probably super disappointed. Unfortunately, the Bravermans took a break for the holiday — the absolute last thing we needed before the show's impending series finale, am I right? Fortunately, though, the break's not over. My favorite TV family will be back in action January 8, and unfortunately, Zeek may have died when they return.

In the promo for the next episode, we were warned that the inevitability I've been dreading all season long may actually be happening: Zeek's death, which has been heavily hinted at but not confirmed until Parenthood chose to basically give the big "secret" away before leaving us for over a month. Zeek's headed to the hospital and tears are going to be shed, and I fear that the last episode, "Lean In," was the last time we will see the Braverman patriarch as we've known him for the past six years. And as if saying goodbye to everybody's honorary grandfather isn't enough, seeing how his death affects the rest of the family in the process is going to be absolutely heartbreaking.

There haven't been many spoilers released about the rest of the season, but we have been warned that the upcoming episode — the show's 100th — is going to be a major tearjerker. Showrunner Jason Katims said:

It's going to be a particularly emotional episode ... [that] deals with Zeek's health. It's an unusual episode in that it's a more compressed time frame than most of our episodes. It probably happens over 24 hours. It really is the beginning of the final movement of the series. ... It's hopefully what will be a juggernaut toward the ending of the show.

Fortunately, though, we will see Zeek alive again — even though he won't be in great shape when we do. The promo shows us Zeek in his hospital bed, hugging Camille and receiving bad news from a doctor about his heart, so we have that, at least. I doubt we'll ever see him outside the hospital again, though, and being that Katims noted that the episode takes place over 24 hours, I think it'll be the same 24 hours that Zeek dies.

Regardless of how this ends up playing out, you're going to want tissues and probably some sort of alcoholic beverage. In fact, you may want to preemptively call out sick from work the next day, too. It's going to be THE. WORST.