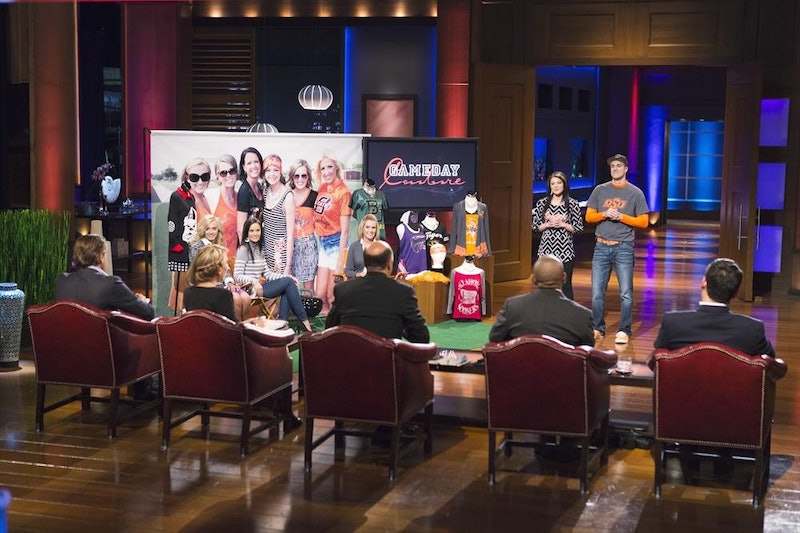 As sad as it sounds, we still live in a society that labels sports as an interest only for dudes. We all know that ladies play just as hard and cheer just as loud as guys, but they often aren't given that opportunity or even feel like they can show their team spirit. That's where Gameday Couture, one of the upcoming products to be shown during the Dec. 5 episode of Shark Tank , steps in.

Gameday Couture is a women's clothing brand that puts the fashion in fan apparel. The company takes your regular old sweatshirt supporting your college team and takes it to a chicer level. The clothing is pretty, and I could totally see female sports fans wearing its stuff. But it doesn't really matter what I think. What we all want to know is whether or not the sharks will bite at this seemingly tantalizing offer.

It's all going to depend on the company's valuation and sales, two pieces of information we won't know until the episode airs. However, if I had to guess right now, I'd say the sharks most likely to take a stab at this deal will be Mark Cuban, Lori Greiner, and Daymond John. As the owner of the Dallas Mavericks, Mark is of course a big sports fan, so he might be personally interested in this product. Gameday Couture definitely seems like something Lori could easily sell on QVC. And Daymond not only has the most experience in fashion as the founder of the clothing brand FUBU, but he is also the king of licensing, which will surely be needed to help grow the business.

Will Gameday Couture hit a homerun, or will it ultimately fumble (sports puns, ha!)? We'll have to wait until we watch the episode to find out, but perhaps these fun facts about Gameday Couture will give us a better idea of its fate.

There are tons of clothing options...

Gameday Couture has quite the selection. T-shirts, sweaters, and scarves, oh my! Leave the uniforms to the players.

...but not every school is represented

Gameday Couture has an OK collection of colleges that adorn their fashions. There are 34 universities currently listed on the company's website, and they're mostly located in the South, including the University of Alabama, Clemson, and the University of Tennessee. So if one of those is not your alma mater, you're out of luck for now. However, I'm sure expanding to other schools across the United States is one of the reasons why this company is on Shark Tank in the first place. I'll give 'em a break.

You can get your Gameday Couture on now

The Gameday Couture website is up and running and ready to sell you some fan apparel. If you like what you see, you can buy some clothes through the website. Or if you'd rather try this stuff on for size before you buy, you can contact the company at info@gamedaycouture.com to find a local retailer that carries their products.

They Have Something in Common with Mark Cuban

We don't know for sure which shark, if any, decided to invest in Gameday Couture. However, this tweet from Oct. 30 is very interesting. Apparently, Gameday Couture showed off their stuff at the opening night of the Dallas Mavericks' season with some apparel specially designed for fans of the team, the company's first items for a pro team. I don't know if Mark invested in the company or if he's just a fan, but it seems like there's some relationship going on here.

You can watch the company's Shark Tank audition

Back in February, a local news station caught up with some of the companies auditioning for Shark Tank during an open casting call in Atlanta. You can check out the company's founder Shawnna Feddersen giving a quick pitch to the station for a sneak preview of what we can expect from her appearance on Shark Tank. The local news station also asked users to vote for whether they thought Gameday Couture or one of two other companies called Playout and Slush Naturals would make it on the show. Among the small number of votes, Slush Naturals overwhelmingly won, but we haven't seen that product on Shark Tank yet, so...

Before Feddersen started Gameday Couture with her husband Kurt, both of whom will be pitching to the sharks on the show, she was a hairstylist and also a beauty queen. She notably competed in the 2005 Mrs. United States pageant representing Oklahoma. Feddersen also started a lawncare and landscaping business with her husband called TeamFed.

But will any of this impress the sharks? Gameday Couture better have the bucks to back up the beauty.

More like this
Amazon's Selling A Ton Of These Cheap, Comfy Shoes That Could Easily Cost 3x More Than They Do
By Nicole Zane and Scarlett James
Genius, Problem-Solving Clothing That's Insanely Popular On Amazon
By Claire Epting and Anna Anderson
The 15 Best Travel Cardigans To Stay Cozy & Chic En Route
By Andrea Gale Boerem
These Shoes Under $40 Have Near-Perfect Reviews Because They Feel Like You're Walking On Clouds
By Maria Cassano
Get Even More From Bustle — Sign Up For The Newsletter