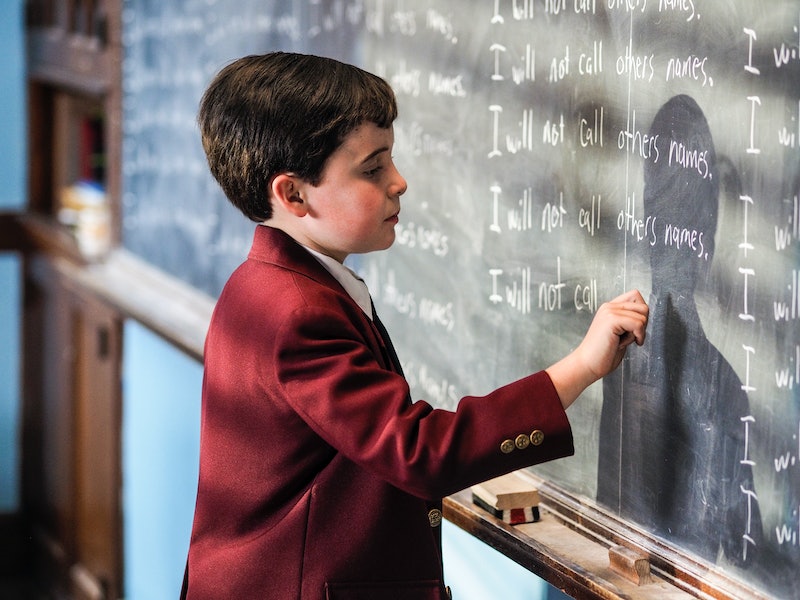 I've been a big fan of the author Wally Lamb since I read She's Come Undone over Christmas in 2005. Although that book was an emotional story of a woman from girlhood to adulthood (and it's amazing how accurately Lamb covered the female perspective), his book Wishin' and Hopin', which is now a Lifetime movie, seems like it could be a bit closer to Lamb's own life experiences. Seemingly much less dramatic — and much more lighthearted — than his other novels, the Christmas story revolves around a 10-year-old boy, Felix Funicello, growing up in 1964. And the Lifetime-movie version of Wishin' and Hopin' — premiering Saturday, Dec. 6 at 8 p.m. — appears to be sticking pretty close to its source material.

Of course, as with any book-to-movie adaptation, some information will be lost. Considering the fact that if you were to listen to the audio of Lamb's Wishin' and Hopin' unabridged, it would run 4 hours and 41 minutes and the Lifetime film runs closer to 1 hour and 30 minutes, not everything from the novel will be in the film. But both the book and movie have Felix attending the fifth grade at St. Aloysius Gonzaga Parochial School with substitute teacher Madame Frechette — portrayed in the film by Molly Ringwald.

I must admit it's a bit bizarre to see Ringwald move from high school student in detention to front of the class as a teacher in a Catholic school, but I will accept that it's been 29 years since The Breakfast Club and move on with my life.

Like with Lamb's other books, the setting takes place in the fictional town of Three Rivers, Conn. (four out of his five novels take place there, with She's Come Undone being the loner). And the movie actually filmed in Norwich, Conn. But the Connecticut setting is not the only thing his books share, since characters in She's Come Undone and I Know This Much Is True (my favorite book of Lamb's) also had characters attending Catholic school.

Other similarities from page to screen include:

But the biggest shared plot point is the fact that the students are gearing up for a Christmas pageant at school. With the holiday theme and Chevy Chase narrating as older Felix, the movie seems to be channeling A Christmas Story, but with some added religious aspects thanks to the Catholic school setting.

Lamb's novels are typically sprawling portraits of a single character as they go through life's ups and downs — and let me say the downs are usually plentiful and depressing (albeit beautifully written). So with a track record of writing gut-wrenching novels and releasing collections of essays by his female writing workshop students from York Correctional Institution, Lamb is not the first person who comes to mind when you think of a Christmas movie. (Although the fact that he teaches a writing workshop at an all-female prison and publishes their work makes him even more magnificent to me.)

Yet, his holiday tale looks to be a fun, outrageous movie, and a walk down memory lane for anyone who went to Catholic school in the 1960s.