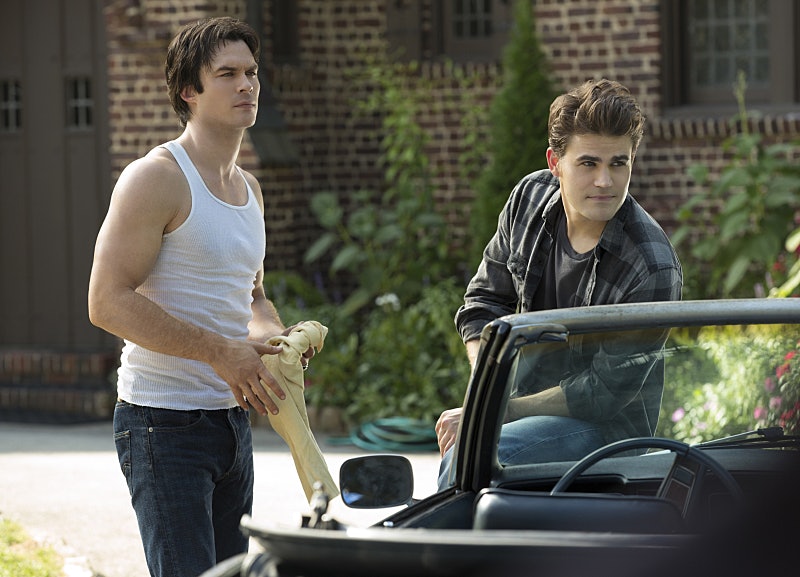 I never thought I'd say this, but I'm kind of starting to understand how Elena felt when she asked Alaric to compel her. Because I'm so convinced that The Vampire Diaries is never coming back — even though I know it will — from its winter hiatus, that I wish Alaric could compel my memories away. Dramatic, I know, but losing TVD for weeks is essentially the same as Delena being separated by life and death. Right? After its midseason finale on Dec. 11, fans will have to wait a month before The Vampire Diaries Season 6 returns in January. See, I told you you'd want to be compelled.

Just when Season 6 is starting to heat up by connecting Jo, Kai, Luke, and Liv in the Gemini Coven, TVD is going on its massive winter hiatus. And I'm more sad about that than I am about Elena and Damon failing to save Bonnie for the thousandth time during Thursday night's "I Alone." Being a Vampire Diaries fan is hard for plenty of reasons — we have to suffer through invalid 'ships (Steroline), we have to watch characters die over and over again (everyone) — but the hardest might be waiting for the series to come back when it goes on break each December.

Last season, after going on break on Dec. 12, 2013, TVD returned in all of its glory on Jan. 23, 2014. TVD Season 6 will, most likely, follow the same format — so, that means we'll be waiting six weeks before the possible midseason premiere on Jan. 22. SIX WEEKS. You might as well tell me I have to wait four months and then it'll arrive, unannounced, at my doorstep after I've asked my surrogate family member to erase all of my memories of these great moments from the first half of TVD Season 6.

This might've been my favorite thing about Season 6 so far.

Caroline Telling Stefan To Shove It

Ugh, vampire boys. I've never been more proud of Caroline than I was when she told Stefan to shove it at the hospital and then refused to invite him to friendsgiving or be his friend at all. PREACH, GIRL.

Elena Admitting Her Love For Damon, Even Without Her Memories

This kiss in the rain flashback was pretty great, too. But, after making us wait for, like, two whole episodes, hearing Elena confirm that she loves Damon with or without their "epic romance" memories was all the feels.

This guy just can't catch a break — OK, maybe he did this one time.

Jo Being A Total Badass

For once it's actually cooler to be a witch than a vampire on TVD.

LOL, what? At least his beeper survived?

Yep, I could definitely use some compulsion right now.