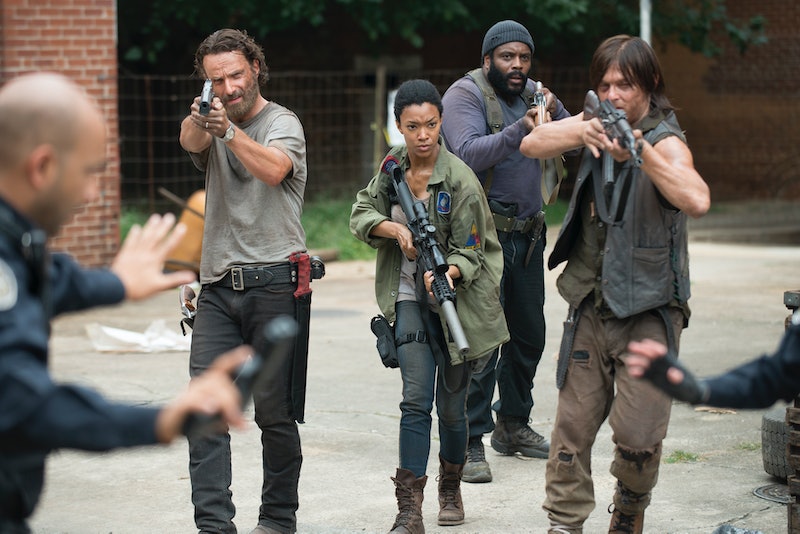 In a very dramatic mid-season finale of The Walking Dead, most fans were devastated by the loss of one fallen survivor (don’t worry I won’t spoil who kicked the bucket right off the bat like AMC did on Facebook, #fail). Regardless, we now have to wait two months for Walking Dead Season 5 to return on February 8 and in the meantime we can mourn the losses of our fallen tributes, even though Carl is still alive and I don’t understand what he's contributing to the show at this point.

I am going to spoil who died now, so leave or stop reading.

On Sunday night we went through a wide range of emotions. When Beth finally took charge and went to stab Dawn, it all happened so fast. The gunshot went off and Beth went down. Of course, right as Beth was starting to become a useful member of the zombie apocalypse she takes herself out on a whim. So, what’s the good news that comes with the death of Beth Greene? There will be no romantic plot line between Daryl and Beth and all the Carol/Daryl 'shippers can rejoice and keep on 'shipping.

(Side note: Was anyone else bothered by the fact that Maggie basically forgot she had a sister until this episode? Makes it a little tough to be too concerned with how upset she was at the end.)

Now that Rick & Co (minus Beth_ are back together, they're headed to a safe place — at least that's what the preview for the February episodes allude to. This means that the Alexandria Safe-Zone is probably coming soon and they will either get there at some point in Season 5 or the finale. The preview also mainly focused on Michonne, who this season has pushed to the background this season. Hopefully the writers give her a bigger role when the show returns.

If you kept watching past the preview on Sunday, you will have noticed a Morgan Jones scene and he is getting closer to the group, so when the show returns, it’s only a matter of time before a reunion.

In the meantime here are a few things you can do while you wait for the show to come back:

No really, you’re reading a semi-spoiler right now when you could also be reading the comics and learning things you didn’t know and join in on figuring out how the comics differ from the show. You have two months, read a book.

Remember the good old days with Shane and Dale. Unfortunately Lori is there too, but you can ignore her or you could watch the scene where Carl kills her again. Happy holidays!

Prepare for The Apocalypse

Come on, you know you’ve thought about where you would go, what you would do, and who you’d be with during a real zombie situation. Sketch out your attack plan if you haven’t already. I will be stocking up and getting to a boat, personally.

Sometimes we just need to fill a void and when Walking Dead isn’t available ,we turn to Shaun of The Dead and Zombieland.

More like this
Everything To Know About 'The Last Of Us' TV Adaptation
By Sophie McEvoy and Radhika Menon
Nicola Coughlan Shared A Lady Whistledown Excerpt From ‘Bridgerton’ Season 3
By Grace Wehniainen, Alyssa Lapid and Sam Ramsden
UK Viewers Will Have To Wait To Watch The Handmaid’s Tale S5
By Maxine Harrison
A New 'And Just Like That' Table Read Pic Confirms A Key Character's Return
By Jack Irvin and Grace Wehniainen
Get Even More From Bustle — Sign Up For The Newsletter