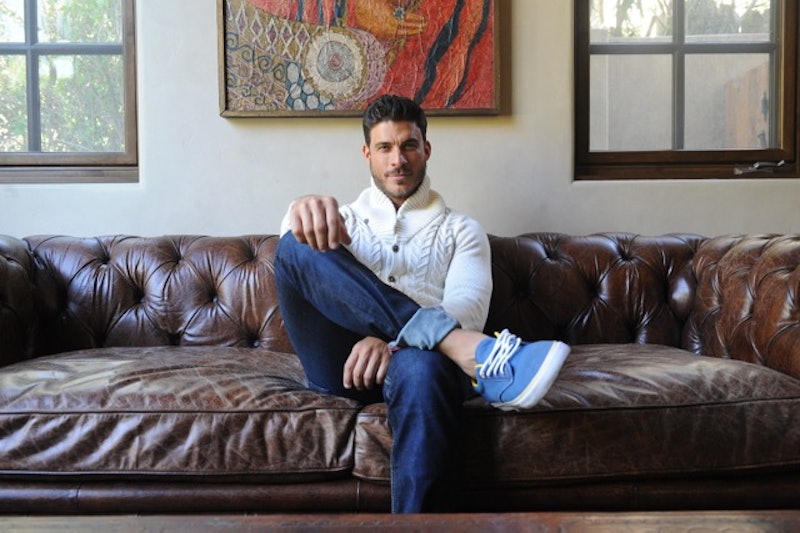 Well, it’s official: My life has reached its pinnacle. It’s all downhill from here. I had the immense pleasure of speaking with Vanderpump Rules star Jax Taylor, and I don’t think anything that’ll happen from here on out will be able to top it. I may or may not be toying with the idea of getting a "JAX" tattoo to commemorate the day. Taylor and I talked about his XCALIBUR clothing line (I want all of the sweaters right now), Season 3 of the Bravo reality show, and of course, my favorite subject: Stassi Schroeder.

“I’m really not a terrible person,” the Vanderpumper replied when asked what the biggest misconception about him is. He noted that the show shoots each season for six months, and all of that footage is edited down to a season’s worth of 45 minute episodes. We only see the beginning or the end of a storyline (e.g., his and Schroeder’s relationship). He added that it’s “a little annoying” when viewers call him "an idiot" or judge something he did in an episode because we’re only seeing a sliver of what happened. We don't know the full story.

Though I do regret not asking for the full story behind why he thought it was OK to dump then-girlfriend Laura-Leigh minutes after her AA meeting.

But Taylor has no (well, few) regrets. “There’d be no show if I said, ‘Stay out of the gossip, stay out of the drama.'" He did say wishes he had never cheated on Schroeder. “That was a huge mistake in my life,” he admitted. “That was pretty catastrophic.”

However it doesn’t sound like he necessarily misses dating Schroeder. "[The relationship] was so toxic. A lot of people didn’t see a lot of what actually happened. We dated for three years. And we started the show at the very end of our relationship. Literally. The very end."

And that's not all. He spilled about the couple's breakup. "[The breakup] was actually not planned, it just happened. So, you know, the relationship the last six months before the show was such a disaster, such a mess, which people do not know. And this show, it captured all our downfall. On the show," he said, noting that he also regrets sleeping with costar Kristen Doute.

So what's his relationship status now? "To be honest, I don’t even know my current relationship status … I couldn’t even tell you if I wanted to.” And though he's attracted to very strong, independent woman, Taylor doesn't consider himself a feminist.

But, in regards to the cheating, the sweater god has a point: It'd be a very different show if he didn't cheat on Schroeder or hook up with Doute. Alas, the real-life drama that befalls the cast is why we keep watching. And Taylor dropped a bombshell when I asked if/how PUMP has impacted the SUR/Vanderpump Rules world (he assures it hasn't): He casually mentioned that Doute was fired.

I don’t even remember. I never work with her, I don’t see her that much … Is she there? Is she not there? I don’t know … I don’t really talk to her that much.

The mystery shall remain a mystery.

So will Taylor be back for a Season 4 (if the show gets picked up for another season)? “Um, I dunno. I don’t know yet.”

If you follow Taylor on social media, you know he’s down with the emoji. So, I had a feeling he’d be game for the Bustle Emoji Challenge. And game he was! I hit him with a topic, and he responded with the first character that came to mind.

His relationship with Stassi:

His and Tom Sandoval's friendship:

You can check out XCALIBUR over at the online shop and watch Taylor on the current season of Vanderpump Rules Monday nights at 9 p.m. on Bravo.

More like this
The 'Love Is Blind' Season 3 Trailer Teases A Possible Fiancée Swap
By Kadin Burnett, Grace Wehniainen and Gabrielle Bondi
Kourtney Kardashian Says She “Loves” The Changes To Her Body Caused By IVF
By Jake Viswanath
Kim Kardashian Reveals Her Response To Kanye’s Fashion Opinions
By Jake Viswanath
Kesha Is Down To Be The Next Bachelorette
By Jake Viswanath
Get Even More From Bustle — Sign Up For The Newsletter