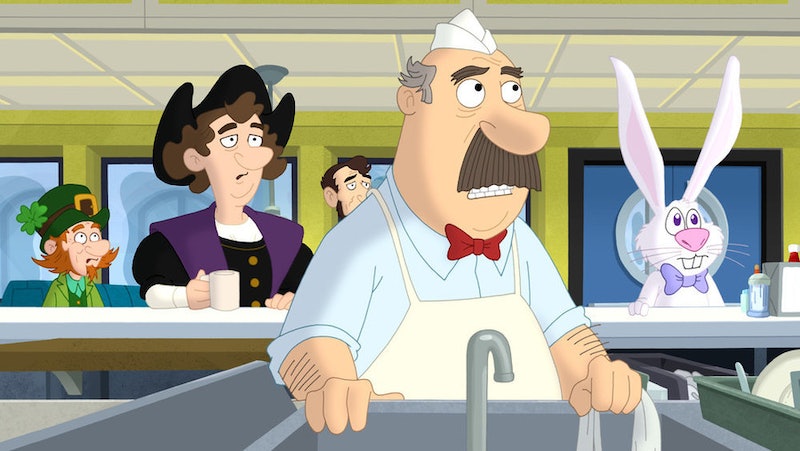 In the grand tradition of The Santa Clause, the Regular-Person-Filling-In-For-Santa genre has a new entry in NBC's animated How Murray Saved Christmas , which will be airing the night of Dec. 5. Jerry Stiller voices Murray, the grumpy deli owner who will have to fill in for Santa after he's knocked out by a errant punch. Even though Murray might grumble and complain, he's got a heart of gold, and there's no doubt by the end of the movie he'll be beloved by everyone at the North Pole. He'll probably even become an honorary elf by the end of the movie. It's exactly the type of grump with a heart of gold story to juice up your Christmas spirit.

And Stiller is the perfect choice for the bad-tempered, mustachioed Murray. Not only does he have a recognizable voice that can perfectly convey the irritation of having to stay up all night on Christmas Eve and also panic with the best of them, but he'll be cartoony enough for the kid audience, and he's had a long enough career that anyone old enough to grow up watching Seinfeld reruns will recognize him. He's the perfect Murray, but if for some reason you're not familiar with Stiller, here's recap of some of his best roles.

He's Well Known for The King of Queens

Stiller had a main role on sitcom King of Queens, playing Leah Remini's father, the equally bad-tempered Arthur Spooner, a lifelong New Yorker who moves in with his daughter and son in law, tormenting them from their own apartment by nagging constantly and making fun of Doug (Kevin James' character). Stiller was planning on retiring in 1998, but postponed it in order to take this role.

But His Other Big Role Was on Seinfeld

In the mid-'90s, Stiller had a recurring part on the classic sitcom about nothing, Seinfeld, as George Costanza's father, Frank. So another classic show where he was a crotchety old guy — sensing a pattern here? It's part of a recipe for TV genius.

And even though he's most famous for playing dads, Stiller is a real one as well — his son is Ben Stiller, the huge super famous movie star (and director). Jerry and Ben have worked together many times, from costarring in Zoolander to The Heartbreak Kid to the web series Ben produced starring his parents.

More like this
Netflix Reveals First Look At Wednesday In The 'Addams Family' Spinoff Series
By Bustle Editors
Kenan & Kel Just Reunited At The 2022 Emmys & Twitter Is Overjoyed
By Grace Wehniainen
A TikToker Just Proved Gossip Girl's Identity Was Revealed In Episode 1
By Jake Viswanath and Meguire Hennes
15 Offensive AF Jokes In 'Friends' That Really Aren't OK
By Tolly Wright, Bustle Editors and Meguire Hennes
Get Even More From Bustle — Sign Up For The Newsletter