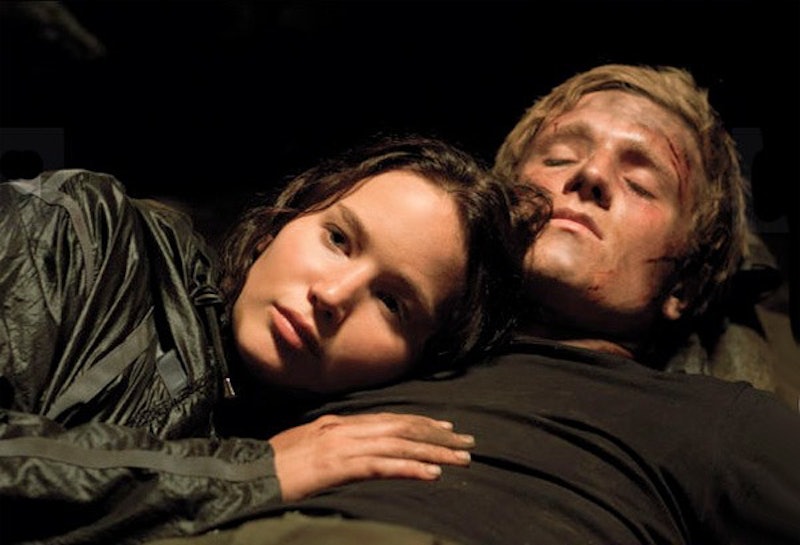 It's old news to wonder what a celebrity couple's kids will look like. I'm all about speculating what my fictional favorite pairing's children will look like. Now that the waiting for Mockingjay Part 2 has begun, there's nothing to do but [spoiler] try to imagine who will play Katniss and Peeta's kids. It's all but confirmed that the film will end with the book's epilogue, and that means we'll get to see their son and daughter brought to life.

The two characters don't even have names let alone actors attached to them yet, but that doesn't mean I can't start imagining who the movie will pick to play them. In the Mockingjay novel, Katniss describes her daughter as "the dancing girl with the dark hair and blue eyes," and her son as "the boy with blond curls and gray eyes, struggling to keep up with her on his chubby toddler legs."

So we have a pretty decent idea of what they'll look like, which means picking an actor to portray them is a little easier. The daughter would be about seven, I'm guessing, if she's past the toddler stage her brother is at in the epilogue. There are a lot of talented child stars around that age, but I've narrowed them down to these two options.

OK, so technically she's blonde instead of dark-haired, but so is Jennifer Lawrence. Slap a brown wig on her and she's got all the sass and strength of her fictional mom.

This seven year old has the brown hair and the stunning blue eyes for the part. Plus, she kind of looks like Josh Hutcherson did as a child actor with those sweet chubby cheeks, so she would be believable as his daughter.

And for the boys, it was a little harder to choose. Not a lot were in the toddler age range of two to four, but a couple were close enough in age that they could probably pull it off. Here are my suggestions.

You may have seen this five year old being super adorable in those State Farm or Walmart commercials. But with talent like his he deserves to make the jump to the big screen. He is too cute.

He had a bit part in this documentary because he's the director's son, but with his swooshy blonde hair, sweet demeanor, and blunt attitude he could totally be the son of our favorite baker and huntress.

Hopefully whoever is chosen for these roles actually looks like what Collins described. You can tell she put thought into how the two children would look, and I love that they each got their parents hair, but switched eye colors. So the daughter has her mother's dark hair but Peeta's blue eyes, and the son has his father's hair and his mother's eyes. Staying true to that detail will keep fans happy, no matter who they pick to play the part.