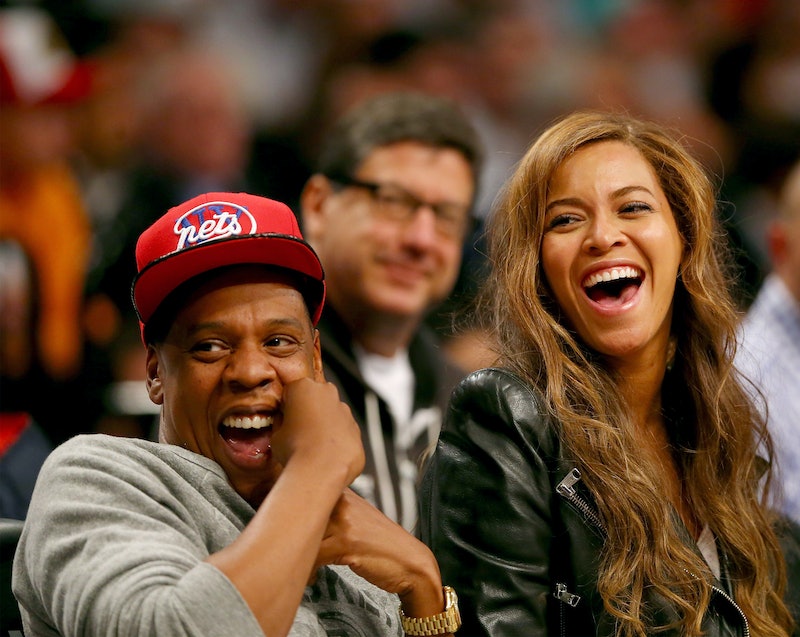 Ah, America — a democracy, indeed, but that doesn't mean it doesn't have its royalty. The closest we can get to a royal family is Queen Bey and Jay Z. And royal they are indeed. In 2014, Beyoncé and Jay Z's net worth soared to over one billion dollars. If that's not true ascension, I don't know what is. As we rumble toward the end of 2014 at breakneck speed, let's take a look back and honor Our Lady Beyoncé and Our Lord Hova for their magnificent year.

Because the power couple and their baby Blue Ivy have had one hell of a year. Not a surprise for such icons, but impressive none-the-less for just how many magical moments they packed into 2014. From their Grammys performance to the On the Run tour to elevator-gate (which I won't be including here, because there are many more moments that overshadow all the shade that came with the Jay Z/Solange feud), it seems like Bey and Jay had no free time, what with constantly making history and all. Refresh yourself, because we know it's tough to keep a mental catalogue of royal realness.

In January, to start the year off with a bang, Billboard named Beyoncé and Jay Z the most powerful people in the music industry, topping their Top 100 chart. 50 million 'round the world and you say that they couldn't get it.

Right on the heels of being announced most powerful, Beyoncé and Jay Z opened the Grammys with a sexy, wet-haired performance of "Drunk in Love." Bey wore a leotard, as she does. Jay wore a tux, as he does. Though some found it boring (I wouldn't entirely disagree), it still shocked and angered parents everywhere for being too "risque."

Despite the rampant divorce rumors about Jay and Bey, Beyoncé took a ton of adorable father-daughter snaps of Hova and Blue Ivy on their summer vacation in the French Riviera. (Later they would chill even harder in Corsica to celebrate Bey's 33rd birthday.)

Though this list is in order by date, this is by far, in my humble opinion, the best Jay-Bey-Blue moment of the year. After Beyoncé performed an incredible and superhuman set (17 full minutes!) at the 2014 MTV Video Music Awards, she was honored with the Michael Jackson Vanguard Award by her husband and darling Blue. THE AMOUNT OF LOVE ON THAT STAGE! And Blue Ivy's pride for her mama :')

Speaking of Blue Ivy at the VMAs, how could I fail to mention the Vine of her dancing and inheriting her mother's flawlessness?

The On the Run Tour

In April, Jay and Bey announced that they would be touring together for their On the Run tour which lasted from June through September, and probably sent a lot of fans into heavy panic attacks from sheer euphoria. It later was taped and aired as an HBO special, but perhaps the best moment was the couple performing a tender and touching mashup of "Halo" and "Young Forever" played to images of their perfect baby Blue Ivy. I'm not crying, you're crying.

How dare you not recognize royalty? Shame.

The beginning of October was forever changed when this photo emerged. I just... can't.

The Queen & Her King of Pop

As if there wasn't a way for me to love Bey more, she shut down the Halloween game this year. First, as Janet Jackson from Rhythm Nation with Blue Ivy as MICHAEL JACKSON (squeal)...

OK, so not Pablo — but Bey as Frida, Jay as Basquiat and Blue in a Basquiat jacket is art in and of itself. Highbrow brilliant. Why is this video of Bey and Jay sharing a pretzel at a Nets game so important? Because it proves they are mortal, just like us. Or at the least, demi-gods. Even Bey loves a greasy salted pretzel. Meaning we have one, minute thing in common.

And it's not Dec. 31 yet, so who knows what kind of monumental moments Bey and Jay will have before the year is out?

More like this
Beyoncé’s Special Tribute To Sister Solange Was Both Touching & Hilarious
By Stephanie Topacio Long
Here's Exactly When Rachel & Tino's Fight Happened After 'The Bachelorette'
By Grace Wehniainen
How Ghosts Inspired Kesha's New Music
By Jake Viswanath
Is Dua Lipa Dating Trevor Noah? New Photos Show Them Kissing & Hugging
By Brian Anthony Hernandez and Martha Sorren
Get Even More From Bustle — Sign Up For The Newsletter