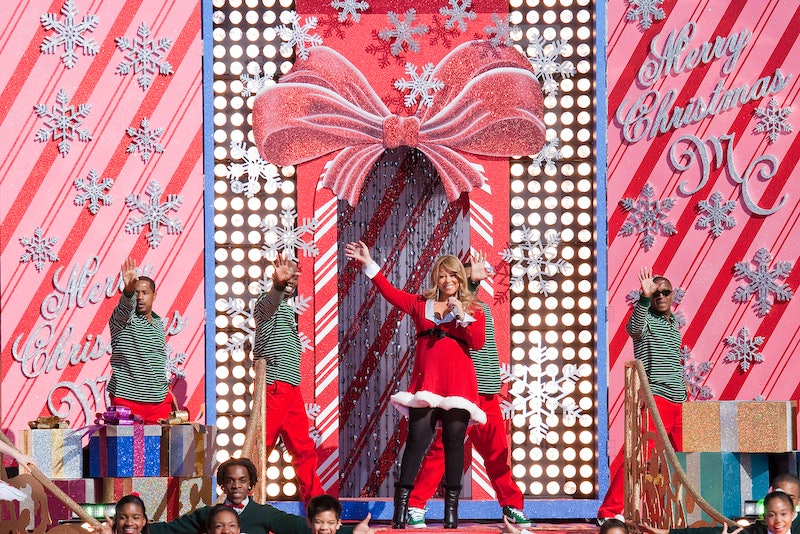 It's the most wonderful time of the year, you guys. I hope you've strapped yourself in for a thousand and one Frozen references and for having to listen to the same five Christmas songs in every store between now and the actual holiday. In fact, we're only four days into December and already Mariah Carey has thrown a diva fit at a Christmas tree lighting (allegedly) and Ariana Grande has released an original Christmas song, so the sleigh bells are in the air. Of course, listening to the same five Christmas songs has been going on since roughly two seconds after Thanksgiving ended, but that's not the point. The point is, it's that time of year again — and that those Christmas songs are timeless.

They're so timeless, in fact, that every state across America has its own favorite. Through data analysis of search terms, I was able to determine exactly which Christmas song is beloved by which state. Is Hawaii a huge fan of "O Holy Night?" Does New York love to jam out to "All I Want for Christmas Is You?" The popularity of the songs below might come as a surprise to you, but at least one thing is for certain: It doesn't matter how many times you have to listen to the same tune again and again. Some things never go out of style.

As for whether or not you agree with what the rest of your state likes, well, that's for you to decide. If you hate it, it's probably time to move.

I just assume this is because "pah-rum-pum-pum-pum" is just as fun to say as Alabama.

Arkansas has really good taste in religious Christmas songs, that's all I have to say here.

I was almost hoping that California would prefer "Let It Snow!" just for the sheer punny goodness of that. Alas, they let me down.

This is a surprising choice, to say the least, but it's not my place to question Connecticut.

If anyone was going to see Mommy kissing the actual Santa Claus, then it probably would happen in Florida.

Song: "All I Want for Christmas Is You"

That's right. Hawaii is a bigger fan of Mariah Carey than everyone else. I wasn't expecting this one, but I can dig it.

I happen to think "The First Noel" is a beautiful song, so good job, Idaho.

Song: "We Need a Little Christmas"

This song is a staple of elementary school concerts everywhere, but that's just because it's family-friendly and wholesome. Which makes it an interesting choice for the state that houses Chicago.

Indiana and "Silent Night" go together like bark on a tree. Or decorations on a Christmas tree, as the case may be.

Song: "Rockin' Around the Christmas Tree"

If there's one city you can count on to be rockin', it's definitely New Orleans.

Maine knows all about that snow, you guys.

Maryland is basically half the capital city, so it's nice they went with a somber, traditional song — though they could have chosen something nondenominational.

Song: "Baby, It's Cold Outside"

Now that you can hear this song covered by children that sound like Idina Menzel and Michael Bublé, don't you just want to move to Massachusetts?

Just listening to this song brings a tear to my eye. I don't know. It's just so hauntingly beautiful.

Mississippi is located in the Bible Belt, so it comes as no surprise that they'd choose a religious song as their favorite. "Joy to the World" happens to be among the most upbeat ones as well.

Song: "All I Want for Christmas Is My Two Front Teeth"

Adorable. That is all.

Song: "The Twelve Days of Christmas"

I expected "The Twelve Days of Christmas" to come out of New York, to be honest, but Nebraska works just as well.

Do you hear that, guys? Nevada is officially the Mean Girls capital of the world. Although, that comes as no surprise. Las Vegas is here.

Do people do a lot of sleigh riding in New Hampshire? Because, if so, cool.

Is New Jersey the state of holiday heartbreak? Don't worry, NJ. This year, you'll give your heart to someone special.

Song: "It's the Most Wonderful Time of the Year"

In retrospect, this song matches New York perfectly. After all, it's one of the three they constantly play at the Macy's on 34th Street. (Yes, that Macy's.)

Song: "I'll Be Home for Christmas"

Getting home to North Carolina for Christmas must be an adventure in and of itself.

Did you know that this song was called something other than just "The Chipmunk Christmas Song?" Because I didn't.

Song: "We Wish You a Merry Christmas"

It's the perfect song for carolers, so this should come as no surprise from the state that has its own musical.

From this, I assume that Pennsylvania is the Christmas tree capital of the world. No one correct me if I am wrong.

Actual fact: Rhode Island does turn into a winter wonderland every year around this time.

Song: "Grandma Got Run Over By a Reindeer"

South Dakota has chosen, perhaps, the most ubiquitous Christmas song in all the world, and I love them for it.

Song: "Have Yourself a Merry Little Christmas"

If Tennessee isn't officially the sweetest state in the country now, then I don't want to know which actually one is.

This is the only Spanish Christmas song that basically every American knows all the words to — plus it's fun to yell — so I can see why Texans love it so.

Song: "Carol of the Bells"

The fact that Vermont loves "Santa Baby" as much as I do is the highlight of my day.

Clearly, Virginia takes Santa Claus very seriously and holds on to its belief in him for years after the rest of us lose it. Virginia, you give the child in me hope.

Washington doesn't need to dream of a white Christmas. They just need to wait.

Cheer up, West Virginia. Cheer up and slow dance to this somber holiday melody.

There are reindeer farms in Wisconsin. That is all.

Sadly, there were thirteen states that had no particular love for any specific Christmas songs. Alaska, Arizona, Colorado, Delaware, Georgia, Iowa, Kansas, Minnesota, Montana, New Mexico, North Dakota, Oregon, and Wyoming might have been left out, but I doubt it's because they don't have a favorite. Instead, I prefer to imagine that each of them like so many of the songs above that it was impossible for the states to come together and pick just one. If you live in one of those states, you can look down upon the rest of us for playing favorites with amazing Christmas music. For shame.