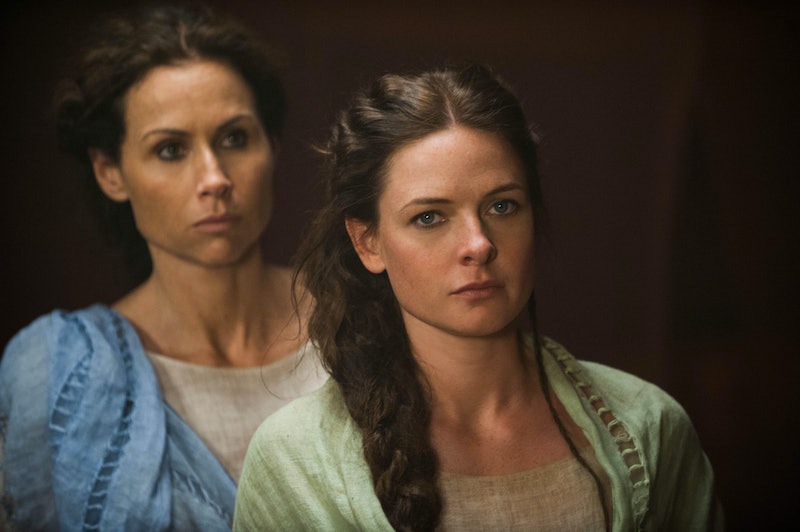 Lifetime has taken a short break from adapting the lives of recent stars and going back to a group of women that have been known to the world for much longer: the stories of Dinah, Leah, Rachel, and Jacob. The network is adapting Anita Diamant's novel The Red Tent, a fictionalization of the Biblical story of Dinah. And if you're wondering where in the Bible Dinah's story comes from, it originates in Genesis, the first book of the Old Testament, otherwise known as the Hebrew Bible. The Book of Genesis covers everything from the Creation myth, how God created the Earth in seven days, to the Adam and Eve story, to Noah and the flood. It's presented as one long narrative stretch that explains how God's chosen people, the Israelites, go from the creation of Earth to slavery in Egypt, where the next book, Exodus, begins with the story of Moses (which you can currently see in theaters, give or take a few Gods and Kings ).

Here's a brief overview of the highlights of Genesis, if you're not familiar. It starts with the creation of the world, including the first two humans, Adam and Eve. After they are expelled from the Garden of Eden for tasting one too many fruits, they have two sons, Cain and Abel. After things end badly between the brothers, humanity continues to disappoint the increasingly vengeful God, who kills all of humanity save Noah and his family. God promises he will never do that again, and instead makes a covenant with Abraham, and his descendants through his son Isaac become the Israelites, the chosen people.

The book The Red Tent expands Dinah's role from the minor mentions she had in the Bible to fictionalize a more complete biography for her. The title comes from the isolated place she and the other women of the tribe are forced to stay while they're menstruating. One of the many cultural dictates outlined in the Hebrew Bible is that women on their period shouldn't interact with anyone else. Also in the original Biblical text is a short, barely descriptive account of Dinah's rape by a prince of another tribe. The story instantly becomes about Dinah's brothers, as they take their revenge on the Prince, and Jacob, their father, as he becomes angry with them because it hurts his political standing. Instead, The Red Tent takes Dinah's point of view, as she genuinely falls in love with the prince and enters a consensual relationship, but is wrenched away from him against her will.

While it remains to be seen if Lifetime can imbue the story with the same depth as the book, they're taking a feminist perspective on Dinah, whose brief appearance in the Bible victimizes and forgets her. Hopefully the Lifetime miniseries can do Dinah — and Diamant — justice.