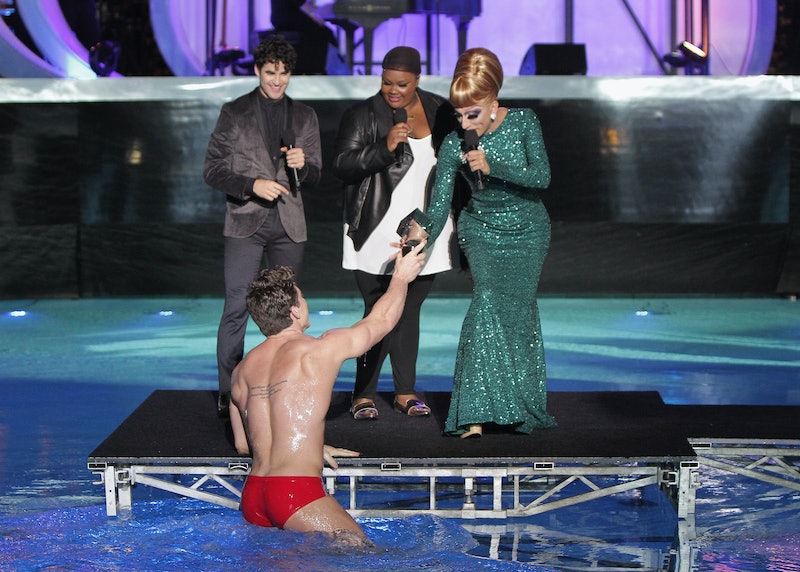 Now that awards season is in full swing, Logo is putting up their biggest even of the year: The NewNowNext Awards, celebrating pop culture through a queer lens. There are many categories targeted at gay entertainers or content specifically aimed at the gay audience. Straight performers get kudos (and more votes) for being outspoken allies, and shows get special thanks for being diversely populated with queer characters. They've only been putting up the awards for five years now, so they're still ironing out a few kinks and building word of mouth, but it's pretty awesome to see LGBT winners in multiple categories of any awards show.

Of course, the NewNowNexts still indulge in all of the typical awards season tropes, so there's plenty of scripted banter (though it's so much less formal than something like the Oscars) and it's all about red carpet gowns and the onstage performances. While the awards already taped earlier this week, they're going to air The NewNowNext Awards on Dec. 7 at 8 p.m. ET on Logo. Even though it's possible to look up who wins in each category, why not tune in and be surprised? There's plenty of acts that ensure that watching the NNN Awards blind will actually be more fun than just reading about it on a gossip blog over morning coffee.

She shows up at the Tonys and occasionally the Emmys, but when's the last time we've actually gotten a new performance from Kristen Chenoweth? She's performing new music from her album, not singing Broadway (boo!) but she's always a reliable live performer.

They Acknowledge the Internet

The Internet is a part of media and pop culture now, but give or take Ellen's famous selfie, there's not much effort to integrate what we're all doing online into established awards shows. But the NewNowNext folks have categories designed around every guilty pleasure, whether it's what website we all love to procrastinate on the most or what celebrity we love just because they're super hot.

Cyndi Lauper Is… Narrating, Whatever That Means

Darren Criss is the official host of the awards, but Cyndi Lauper will be "narrating" them. Does that mean she'll be reading out those boring facts about each winner? If so, that is the only way I will ever find myself paying attention to those announcements. And what else could narrating even mean? Will she be describing the awkward silence that descends on a table where two exes were accidentally placed together, or the hollow sound of high heels in the empty marble bathroom?

If you're not in front of your TV at 8 p.m. sharp after hearing that, I just don't think we can be friends. If there's even a whisper's chance that she screams "Baloney!" in someone's face, I'm there immediately. All the rest of this stuff? Gravy. Speaking of which — they'll also be announcing the cast of the next season of Rupaul's Drag Race on the show.