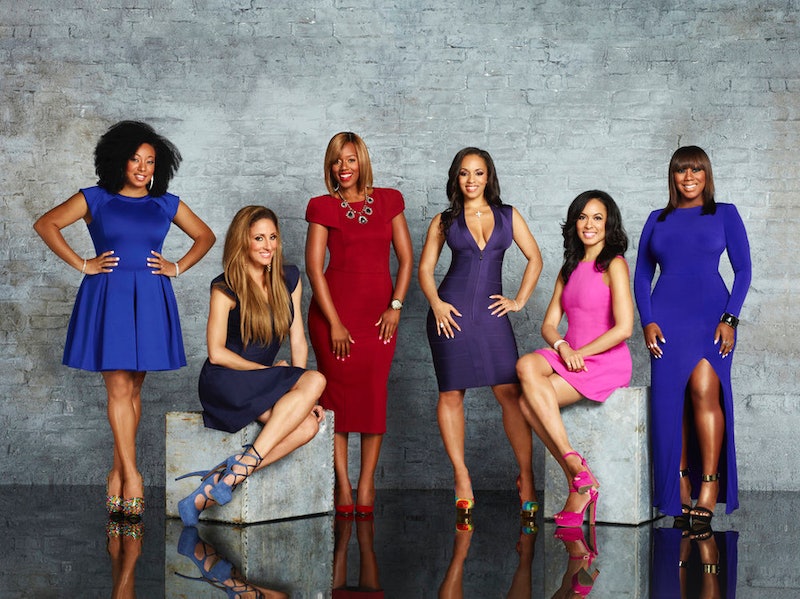 On the season premiere of The Millionaire Matchmaker, Patti will be helping Blood, Sweat & Heels star Melyssa Ford find love in Los Angeles. That reminds me, when does Season 2 of Blood, Sweat & Heels coming back? While we haven't gotten an official start date from Bravo, that's totally typical. The show will return as soon as the filming is completed and there's room in the schedule — probably early spring, considering that they were still shooting at the end of October.

But even though we don't have a premiere date yet, Bravo is not going to want to keep this one on the shelf, because there's plenty of other news on the way for Season 2. First and foremost, a big brawl broke out on a yacht party between Melyssa and Geneva Thomas (you may remember the time Mica referred to her as "Wesley Snipes"). Geneva allegedly attacked Melyssa by hitting her with a vodka bottle, while Melyssa attempted to defend herself by grabbing Geneva's hair. There is some scattered video of the incident, but nothing that definitively shows how bad the hit with the vodka bottle was.

But Thomas was brought up on felony assault charges, and Ford had to spend at least some time in the hospital recovering. Geneva is now suing Melyssa for 25 million for "portraying" her as a criminal. Meanwhile, Geneva was also arrested for not paying her cab fare about two months before the ship incident went down. All in all... it's going to be a rough season for Geneva Thomas.

But all the news coming out of the Blood, Sweat & Heels rumor mill isn't quite so dark. It's rumored that new cast member Chantelle Fraser wasn't just added to the cast of one Bravo show. She's also rumored to be dating Ramona Singer's now-ex husband, Mario, so we could be seeing her on two Bravo franchises at once.

There's also unconfirmed rumor that there could be other shakeups to the cast. Brie Bythewood and Demetria Lucas are both rumored to be axed, for different reasons. Demetria elected not to attend Bravo's upfront, while the rumors suggest Brie was fired for being too boring, even though I personally thought she was always trying to instigate drama. But she's also pregnant with her first child, which doesn't really match with the show's "single/dating in the city" premise.

Back in Season 1, Melyssa didn't have time to look for romance while she was trying to start a new career as a real estate agent. At the Bravo upfronts, she joked that she'd be relying on her costars to get her a man, which clearly did not work if she's heading to Patti Stanger all the way across the country to help her find a date. After hearing what supposedly went down throughout the season, I can't blame her for wanting to get away, even if just for one date.