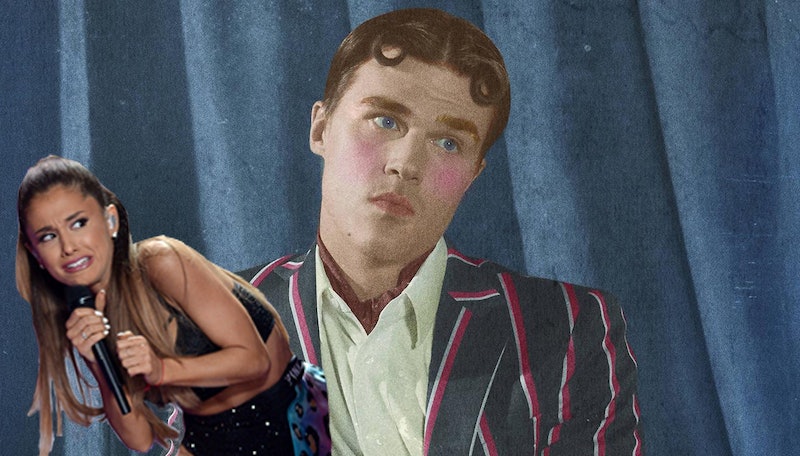 I've said it before, and I'll say it again: Dandy Mott is American Horror Story: Freak Show 's freakiest character. At first, he was just this super creepy adult brat who had a strange attachment to his overbearing mother. Now, he's this super creepy adult brat who bathes in his overbearing mother's blood after he's done butchering her! Yeah, Dandy's a special kind of horrifying, that's for sure. In fact, there's only one person on Earth who's capable of communicating both how terrified I am of Dandy AND how I much I utterly disapprove of every single thing that he does: Ariana Grande. Yup! In case you missed it, during the taping of the 2014 Victoria's Secret Fashion Show recently, Grande was almost taken out on the runway by a passing model's ginormous pink angel wings. Luckily, she was able to duck, and in the process, made the most exquisite goblin face I have ever seen in my whole entire life (seen above).

It's a thing of beauty, this face. It says it all. She looks like Golem, only with a ponytail, and like, lots and lots of lip gloss. God bless the Internet.

Disapproval of His Relationship With His Mother

It was just too weird. She doesn't even know where to turn.

Disapproval Of His Underwear Antics

OK, this was really rude.

Disapproval from All Angles

That mask is beyond hideous. Get him, Ari!

More like this
Twitter Is Saying The Same Thing About Roger Federer’s Retirement From Tennis
By El Hunt
Nicola Coughlan Shared A Lady Whistledown Excerpt From ‘Bridgerton’ Season 3
By Grace Wehniainen, Alyssa Lapid and Sam Ramsden
Everything To Know About 'The Last Of Us' TV Adaptation
By Sophie McEvoy and Radhika Menon
A New 'And Just Like That' Table Read Pic Confirms A Key Character's Return
By Jack Irvin and Grace Wehniainen
Get Even More From Bustle — Sign Up For The Newsletter