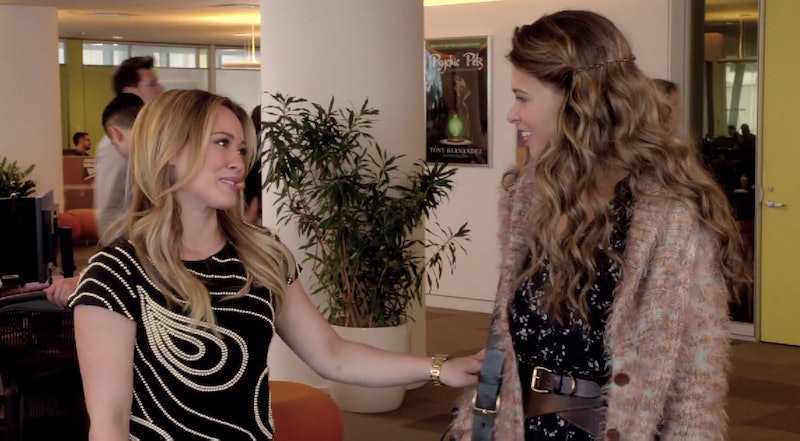 It's been a long decade since Lizzie McGuire went off the air, but Hilary Duff's new show Younger will transport you right back to the early '00s. The new TV Land comedy from Sex and the City's Darren Star finally has a premiere date, so mark your calendars for March 31. This time around, Duff plays more of a Miranda-like supporting role to Sutton Foster's character, Liza, a 40-year-old woman posing as a 26-year-old to land a publishing job. Of course, Kelsey (Duff) takes to her right away, showing her the ropes at the company and quickly becoming her best friend.

Even though we have to wait three months until Duff is back on our screens full time, the network shared a sneak peek at the show's first episode to tide us over. After Kelsey explains the reasons their boss hates young female employees — "our fresh ovaries and our faces plump with natural elasticity" — she uses a feminist Taylor Swift quote to express her friendship to Liza. "It's called paying it forward," Kelsey says with a smile. "As Taylor Swift said, there is a special place in hell for women who don't help other women. I got your back, girl." OK, is it too late for me to get in on this friendship? And with Foster's Broadway background and Duff's singing career, there has to be a karaoke scene at some point, right? Counting down the days until March 2015.

More like this
Taylor Swift Wants To Direct A Movie Next — But You Might Have To Wait
By Radhika Menon
UK Viewers Will Have To Wait To Watch The Handmaid’s Tale S5
By Maxine Harrison
15 Offensive AF Jokes In 'Friends' That Really Aren't OK
By Tolly Wright, Bustle Editors and Meguire Hennes
The 'Reasonable Doubt' Cast Includes A 'Save The Last Dance' Reunion
By Grace Wehniainen
Get Even More From Bustle — Sign Up For The Newsletter