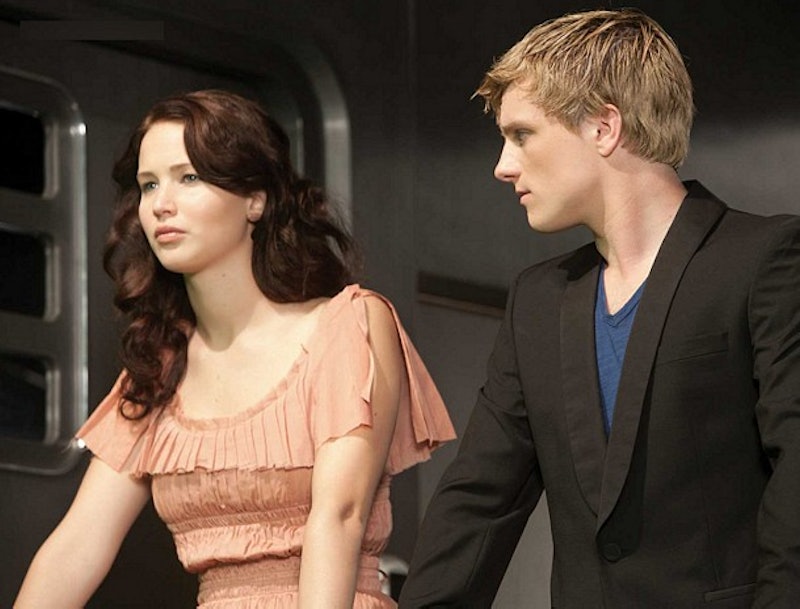 Sometimes Suzanne Collins is wonderfully detailed in her novels, but when it came time to naming the book's most important offspring, she was not so forthcoming. So [spoilers ahead] what are Katniss and Peeta's kids named? Honestly, nobody really knows for sure. Although The Hunger Games author gave readers a pretty good description of the couple's son and daughter, we don't know much about them beyond what they look like.

In the Mockingjay epilogue they're described as such: "The dancing girl with the dark hair and blue eyes. The boy with blond curls and gray eyes, struggling to keep up with her on his chubby toddler legs." But anything about them beyond that is all speculation—including what their names are.

Naturally, not knowing has lead to a lot of debate amongst the fans. Some say it makes sense for them to pull a Harry Potter and honor the dead by naming the children something like Prim and Finnick. Others suggested the fancier Cinnick and Prue which is a mashup of all their dead loved ones from Cinna and Finnick to Prim and Rue.

There are even claims that Suzanne Collins later admitted she named them Willow and Rye. The closest I could come to confirming that information is Entertainment Weekly including the trivia in one of their Mockingjay quizzes. But I couldn't find the source or original interview with Collins saying any such thing. So at this point it's still nothing more than speculation.

If I had to choose though, I'm a fan of the alleged Collins-approved names. I like the idea that they captured the essence of their lives: Rye for Peeta's baking and Willow for Katniss' connection to the outdoors. They're similar to the parents' own names, but also have some creativity to them. Naming their children after people who died in battle is sweet, but too morbid for the pair who is just trying to move on from all those dark memories.

It's entirely possible that we may never find out the children's true monikers. They might be cast in Mockingjay Part 2 as simply "daughter" and "son." Although I am curious, I don't think it's absolutely necessary for them to be named. But I'm hopeful that since Suzanne Collins is one of the film's producers, if there comes a time to give them names they'll get the ones Collins always intended them to have.