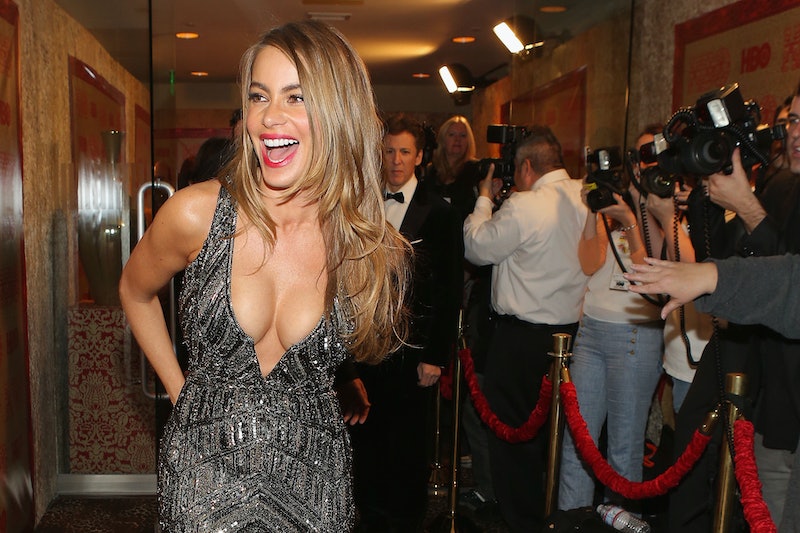 On Jimmy Kimmel Live on Wednesday night, Sofia Vergara talked about her experience becoming a U.S. citizen, saying that it was "a very emotional moment for her." I'm appreciative of the fact that in a time where immigration reform is on the table with America's eyes on it, celebrities are talking about their own experiences with the system. Recently, Orange Is the New Black actress Diane Guerrero spoke about the harrowing experience of losing her parents to deportation when she was only 14, as they were detained and deported back to Colombia. Though Vergara talked about her experience with levity and humor (And laughs! She always laughs!), her tone still conveyed that it was not an easy road.

Vergara told Kimmel, "It took me a lot of time to get my residence even though I was working here for a long time. But it was fun and I got all my questions perfect." She had a positive experience, but the one thing she said that caught me was when she said, "They have to make sure you deserve to be part of the country." She laughed it off, but it's a serious sentiment. And raises somewhat unanswerable questions like, what exactly does it mean to deserve to be American? Simply passing the test? It's hard to say. Vergara herself said that it took a very long time after she came to America to get her citizenship. She emigrated from Colombia at the age of 26 (she's now 42). One of her brothers has since been deported.

Vergara and Guerrero are stars. They are glamorous. They're both on wildly successful shows that have huge followings and fanbases. But just because they're celebrities doesn't mean that they are at all immune to the dangers of the system. It's great that their recognizable voices are being heard because sometimes it's difficult (although it shouldn't be) for people to put a "face" to immigrants when discussing immigration.