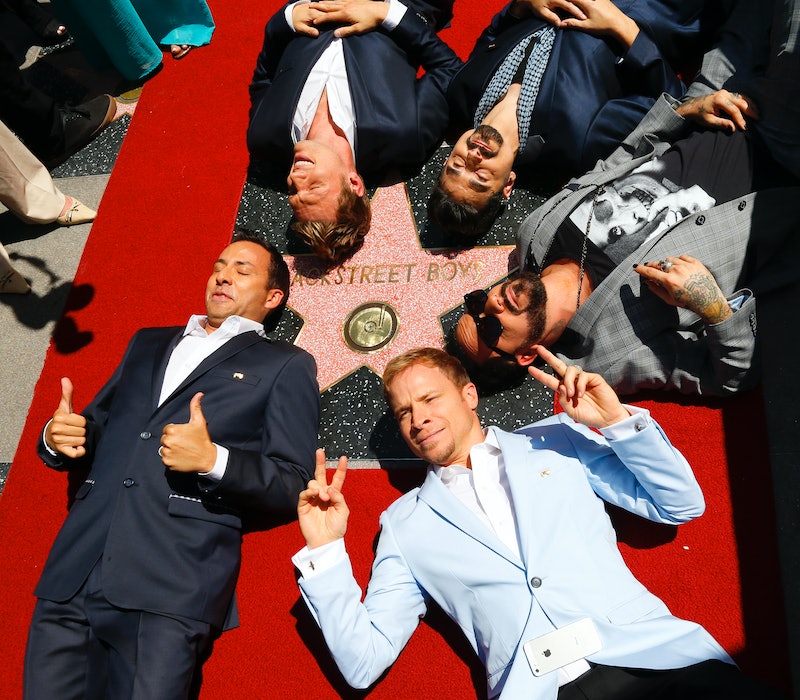 In case you missed the Backstreet Boys Cruise this past October or haven't seen the five fellas who made the Millenium a glorious time for synchronized snapping in their 20-year career as a group, well, now is your chance. Backstreet Boys: Show 'Em What You're Made Of is a documentary that chronicles the long career of the boy band that made boy bands an international phenomenon. The poster for the January 30 realease has just been revealed on Yahoo! Movies, and it has everything fans could want: A snap of Nick Carter, Brian Littrell, AJ McLean, Kevin Richardon, and Howie Dorough showing how much they love what they do with images of their teen dreamy selves in the background.

Since forming in the early 1990's in Orlando, the Backstreet Boys have produced seven major albums, have toured the world countless times, formed a supergroup with the New Kids On the Block, forged successful solo careers, and had a most memorable cameo in This is the End, all the while maintaining a massive and loyal fanbase (including the author of this article. BSB FOREVER!). They've won dozens of awards, had two members recently inducted into the Kentucky Music Hall of Fame, have their star on the Hollywood Walk of Fame, and have made it scientifically impossible to not love, "I Want it That Way." In short, the Backstreet Boys are pop music history-makers and Show 'Em What You're Made Of is going to be the most fun history lesson ever.

The tagline for the movie is, "Sometimes To Move Forward You Have to Look Back." Here's hoping that looking back includes their amazingly 90's boy band hair decisions. I've got a few more taglines up my sleeve: