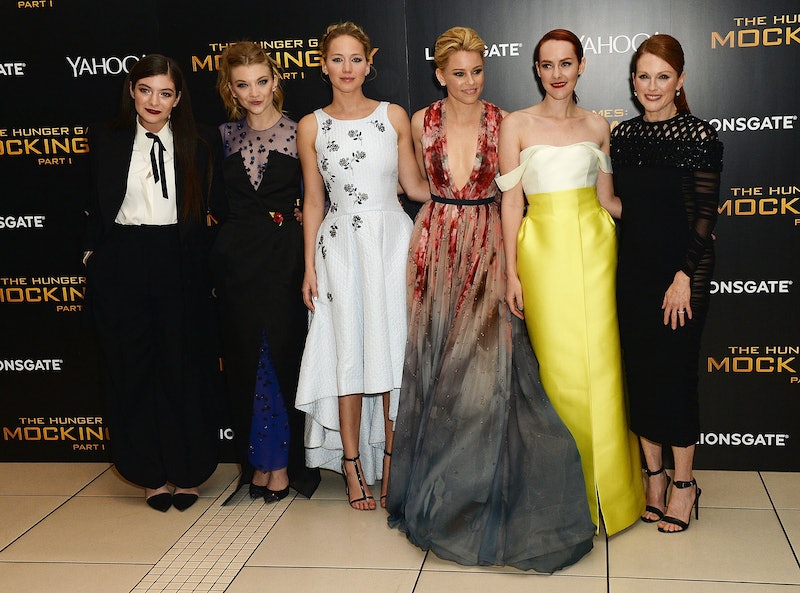 How are The Hunger Games series and Pitch Perfect different? Oh, let me count the ways. I find both to be pretty great, don't get me wrong, but one is a comedic romp about friendship and sisterhood and the other is the bleak tale of a broken society and the PTSD-rattled girl at its center. Which is why it's pretty ridiculous that Republic released a remix of Mockingjay 's "The Hanging Tree" that makes it sound like they're trying to make this song the next "Cups."

There's one key difference here. Well, actually there're many key differences here, but to cut to the chase: "Cups" is not a protest song. As presented in Mockingjay, "The Hanging Tree" is, and a pretty arresting one.

I've seen "Cups" and "The Hanging Tree" mashed up before, but that was in a benign (nay, delightful) way: Lizzie Bennet Diaries and New Media Rockstars writer Rachel Kiley combined the two (below) not long ago. And that was pretty cool.

But, see, Kiley is not a person officially associated with Mockingjay — and so hers is completely divorced from the tone-deaf marketing that The Hunger Games series has been victim to since the franchise's first movie. Hers is enjoyable because it's a fan interpretation, and not a company trying to squeeze a few more dimes out of a protest song.

Republic's is not nearly as fun. As Andrew Sims of Hypable put it:

[...]This song is not popular because people are dying to get their groove on to it at Club Catniss. It’s not intended for when you’re in the car on the way to work, either.

Between promo tie-ins with Subway, Doritos, and Mazda, not to mention that pesky theme park, the companies brining The Hunger Games to the world seem to be missing the point. "The Hanging Tree" making it big on the charts has something to do with star Jennifer Lawrence's popularity, sure — but it's also poignant in a time when Mockingjay's release coincided with real-life and ongoing protests against systematic violence.

Hollywood is going to keep doing its thing, remixing and rebooting and generally finding as many ways as it can to spin what it's got into new money. But the least it could do is pay attention to what it is they're spinning. And when the song they're doing a pop-y remix to has these kinds of real world parallels, not to mention its actual context in Mockingjay?