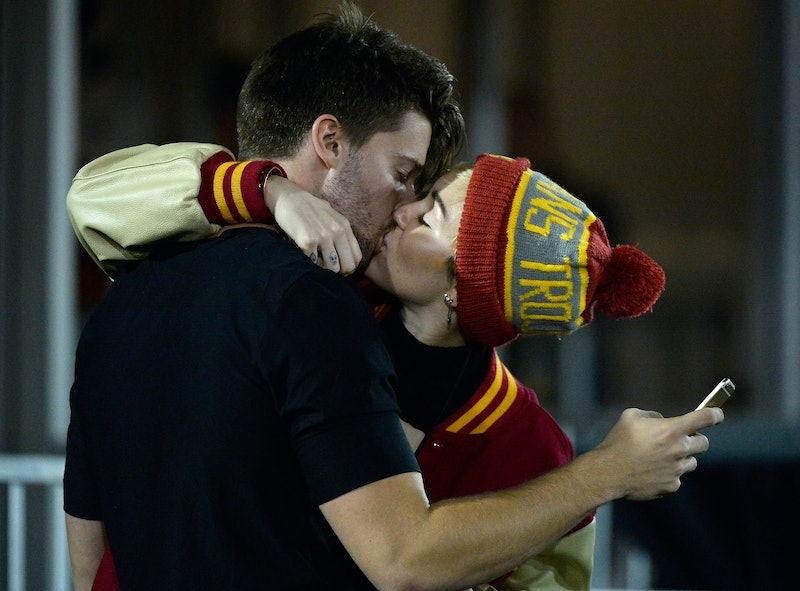 Don't let all that makeup, outrageous costumes, and crazy performances fool you about Miley Cyrus and Patrick Schwarzenegger's relationship. Behind-the-scenes, these two seem to have a pretty low-key and chill coupling. It was recently reported that the two visited Miami, where Cyrus performed at Tommy Hilfiger and Jeffrey Deitch's V Magazine party at The Raleigh Hotel. Before she got on stage (and proceeded to smoke weed), she and Schwarzenegger did "normal" couple stuff.

Per People, the two had dinner at Joe's Stone Crab restaurant and even chilled at the Fountainbleau, a Miami beach resort, where an insider said they held hands and were "being sweet to each other." They also appeared to be "extremely low-key." Based on the photos and details about their dates, they seem to truly have an easygoing time together and nothing over-the-top like Cyrus' disco ball pasties.

Another example is that time they were spotted kissing at a University of Southern California football game. They both wore tame outfits and looked to be enjoying their time together at regular old football game. However, as for Cyrus' 22nd birthday, that's another story in itself. It was quite colorful, but it was a birthday, so I guess you're allowed to splurge and be somewhat crazy?

Despite Cyrus' colorful lifestyle, maybe she just likes to let loose on stage and out in public, all while being a bit more focused and laid-back about relationships? Whatever the case, the duo seem to be having a fun time and that's what relationships are all about.