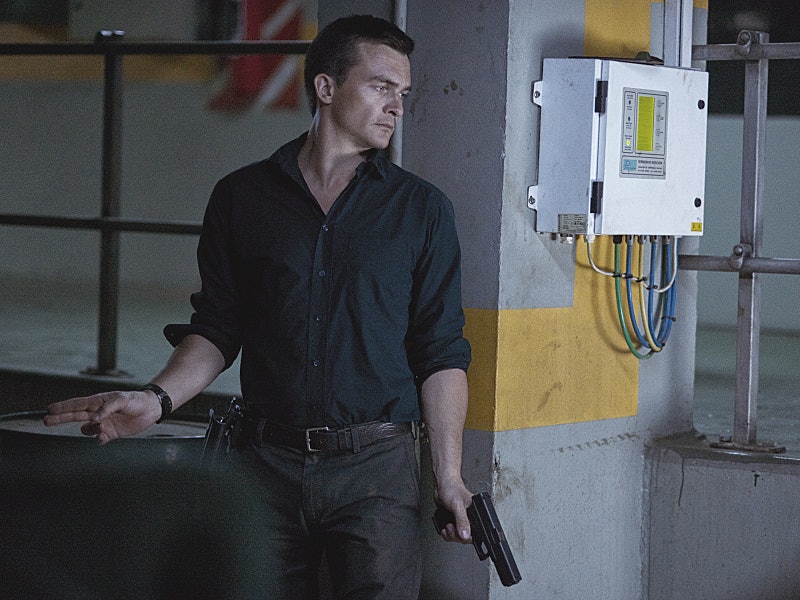 If I haven't made this crystal clear before now, I want the world to know I love CIA operative Peter Quinn (and the actor who portrays him, Rupert Friend). And I'm thinking that on the Dec. 7 episode of Homeland , I am going to love him even more since it looks like it's up to Quinn to protect the embassy. Although it sounds completely ridiculous to think a single man may be responsible for the safety of the U.S. embassy in Pakistan, that looks like what may be going down in "13 Hours in Islamabad." And while I don't need Homeland to turn into a Liam Neeson movie, I wouldn't mind Quinn getting down and dirty to defeat Haissam Haqqani and his group of terrorists.

Quinn has been having a pretty tough season, but thank goodness for his ability to jump back into the game after having post-traumatic stress disorder. Let's just hope the rest of Season 4 doesn't wreak emotional havoc on him. I need Quinn and his disapproving looks, wise (if not concise) words, and dry remarks intact!

Carrie is outside of the embassy with Saul in a car that may or may not have been blown up (it looks like their car was the only one in the caravan not to be hit, but there was fire everywhere). Now with Haqqani entering the embassy, we only have Quinn and the U.S. ambassador to Pakistan, Martha Boyd, to make it right.

With only a handful of marines left in the embassy, let’s hope Martha and Quinn’s quick thinking can get those soldiers back in time. And in the meantime, Quinn is going to need to get into his badass assassin mode. He has that one baby-faced private to help him out (and I worry about his fate), while Martha (and her terrible husband) will hopefully make it to the vault and get the embassy on lock down.

As much as I detest Dennis Boyd, I am thankful that he finally spoke the truth and gave Martha the information that Haqqani and his men are doing a mass distraction to directly attack the embassy. Without Dennis breaking his silence, they wouldn't have any warning that Haqqani knew about the tunnel — but also without Dennis, Haqqani wouldn't have known about it in the first place! Dennis Boyd is THE WORST (and I know Quinn feels that way too).

I will not even entertain the idea that Quinn could die (although the sane part of my brain knows it's totally plausible). I admire Homeland for killing off a main character last season with Brody, but Brody actually lived for much longer than made any reasonable sense. And that's starting to be how I feel about Saul and Carrie. I in NO WAY want them to die — and they are the backbone of this show so I don't think they will — but it is starting to feel like every main character on this show has nine lives. Both of them have now been independently captured by the two number one terrorists at their respective times (Carrie with Abu Nazir and Saul with Haissam Haqqani) and both have survived (as far as we know). And we have seen Quinn in less perilous situations than Carrie is always in, so I'm hoping the same Homeland lifeline logic applies to him.

So, c'mon, Quinn. Save the day. You were (literally) trained for this. I have faith in you.