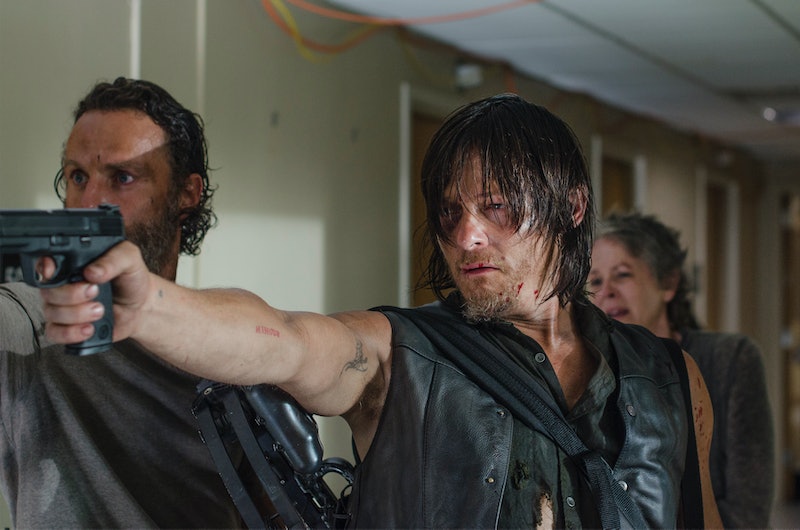 Even as a self-proclaimed not-Beth fan, that The Walking Dead mid-season finale was pretty brutal, my friends. It was hard not to be emotional as Daryl carried out Beth's dead body from the hospital, so when Season 5 returns in Feb., what will happen to Daryl? We know that there won't be much of a time jump since the Talking Dead showed a clip of Beth's funeral that will take place in the second half of Season 5. This ultimately means poor Daryl is going to be quite a mess for a bit.

I'm not trying to be a hater, but I'm just hoping that Daryl doesn't spend the rest of Season 5 mourning Beth's death. I want him to grieve — as he should and as would be the healthy thing to do — but I don't want it to consume him.

Remember when Rick lost his god-loving mind when Lori died? He was out of commission as a leader for way too long. Now, Rick had an outrageously legit reason to be super upset (I mean Lori was his wife, she died in childbirth, his son had to shoot her, she was eaten by a zombie — and to top it off, he had been treating her like the worst person on the face of the zombie-filled earth up until she died).

Not like we need to compare who gets to grieve more here, but if the crew is going to hit the road and head north to Alexandria (as I suspect they will), they need Daryl to be on his crossbow game and not an emotional wreck.

So let's theorize what else is on the horizon (besides being depressed) for Daryl for the rest of Season 5.

Daryl & Carol May Finally Get Together

'Shippers, LISTEN. Robert Kirkman confirmed that Daryl is not gay and I'm pretty sure Beth dying and Carol living means that Carol and Daryl may finally get together. I can't guarantee it will be in Season 5, but I think we are as close to it as we have ever been. Beth was really important in Daryl's life for a part of Season 4. And he will always care and miss her. But now Carol — his adult companion that he has been bonding with since Season 2 — is back in his life. They are going to need each other more than ever — Daryl emotionally and Carol physically. I don't want The Walking Dead to turn into Downton Abbey — and it won't. But I think they already care about each other a lot and that will continue to grow as Season 5 moves on.

I'm also thinking that Beth's death has made Daryl (and Carol) a bit untouchable in the death department — at least for the rest of this season. The show doesn't usually emotionally beat up the audience and the characters repeatedly — they like to spread the wealth. Poor Maggie has it the worst right now with her father dying in the mid-season finale of Season 4 and then her sister dying in the mid-season finale of Season 5. So maybe The Walking Dead will just give us a break with main character deaths for the rest of the season. And I just generally am never too concerned for the fate of Daryl — or Rick — at any time. That day may come, but for now, Daryl's fate seems as safe as it could possibly be (considering he's in the zombie apocalypse).

He Will Kick Some Serious Ass

Uh, obviously Daryl will kick ass. But sometimes when people get depressed on The Walking Dead, they lose their will to survive — and unfortunately, survival in the zombie apocalypse means killing. If he does get too depressed to defend himself, I have faith that someone will remind him that Beth would've wanted him to keep fighting. And if he buries his feelings regular Daryl Dixon-fashion, then we'll be sure to see him do a lot of crazy zombie killing. Kill those zombies for Beth, Daryl!