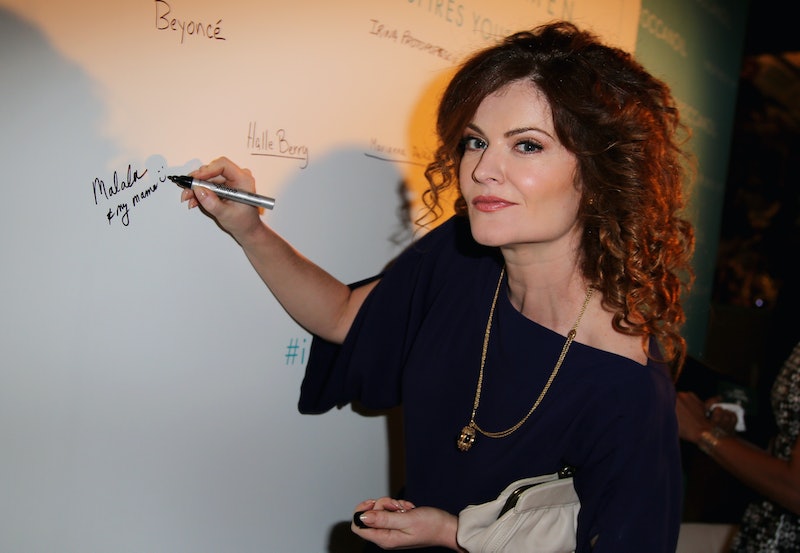 Everyone is someone else on Once Upon A Time — except for maybe Pongo, who really is a dog on both sides of every curse. But for everyone else, they've got their real world persona, and then their Enchanted Forest counterparts. It's been that way since day one of the show, so it only makes sense that every new character introduced into the show follows the same formula. With only two episodes left to go before the winter hiatus, the series is adding another new character to its roster. Rebecca Wisocky will appear on OUAT as "Madam Faustina" in Sunday's episode, as reported by TVLine, and she'll probably have some magica; secrets, just like everyone else. But also like everyone else on the show, does Madam Faustina have any sort of Enchanted Forest past?

Very little is known about this mysterious Madam Faustina, but that's how OUAT does pretty much everything. What we do know is that she crosses paths with Ingrid, the Snow Queen. And, per TVLine, she's "a charlatan who, in flashbacks, pretends to commune with spirits in order to swindle her customers by telling them made-up fortunes." What's a charlatan? So typical OUAT to use a big fancy word like that. It's "a person falsely claiming to have a special knowledge or skill." In this case, she's going to claim to be a fortune teller. Claim, is the operative word.

Examining the roster of Disney characters still untapped on the ABC series, who could Madam Faustina turn out to be?

We got a fleshed out story for "ugly stepsister" Anastasia on Once Upon a Time In Wonderland, but what about Drizella? We met her quickly in the episode "The Price of Gold," but that's been it. If she were to make a comeback, this might be the time to do it. Those two stepsisters are quite shady and will do anything to get ahead. So yes, I could see her taking on a fake magical persona to make a quick buck.

The Sword and the Stone is not by any means a commonly watched Disney movie, but it is part of the character canon. There's probably another kingdom somewhere out there, and Mim — who's good with dark magic — is probably causing chaos on her own.

If I have to be the one to single handedly start the petition to bring The Emperor's New Grove to OUAT, so be it. Yzma was in fact a sorcerer/witch, if you will, with her potions in her lair underneath the kingdom. She was also always aspiring for more — like, the throne — and nothing was going to stand in her way of getting it. She certainly swindled loads of people during her time, and maybe now down on her luck, she takes Ingrid too.

Hey, remember this girl? She crossed Rumple way back when, and gave him the prophecy regarding Henry (and how Henry would be his undoing). We haven't seen her since. It's possible that Madam Faustina is simply the grown-up Seer.

She's someone from the real world

The logline for the character says that in "flashbacks" she'll end up crossing paths with Ingrid. Last we checked, wasn't Ingrid in the real world, our world, for a very long time? It could be conceivable that Madam Faustina is in fact not a fairytale character at all.