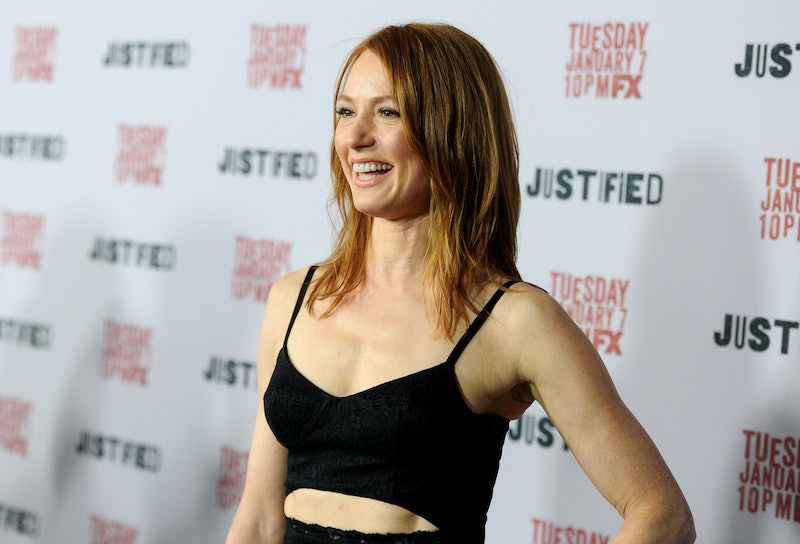 A work friend of mine took her son to see Santa at the local pet store, where they photographed kids and pets together with St. Nick. "I know that wasn't the real Santa," he said as they were leaving. "The beard was fake... and it was a woman." Ah, the glass-ceiling that is the profession of mall Santadom. It's hard for a woman to break into that jolly racket — that is, unless she has some kind of Christmas angel on her side, the way Nicky does in Hallmark's Christmas at Cartwright's . Nicky is, as goes cable-Christmas-movie custom, a single mom who is cash-strapped and looking for love around the holidays. A guardian angel helps her get a job as a department-store Santa. If that Santa looks familiar for reasons other than his/her belly that shakes like a bowl full of jelly, it could be because Nicky/Santa is played by Alicia Witt. But who is Alicia Witt, and where have you seen her before?

Though Witt is only in her thirties, she's been acting for a long, long time — going all the way back to 1984, when she made her acting debut in David Lynch's adaptation of Dune. Here are some places you might have seen her since then.

She Was Awesome on Justified

A lawyer who comes from a family of criminals might be the scariest concept on TV. As Wendy Crowe on Justified, Witt proved to be a difficult match for Raylan Givens and his irresistible smirk. Yet she was still torn between fending off Givens to protect her family of aforementioned criminals, and running to him to help protect her family from its patriarch, her brother Darryl (played by Michael Rapaport). "Working with Rapaport and getting to create that relationship together is one of my favorite things I’ve gotten to do so far in my career," she told Influx Magazine. Besides Justified, Witt has also had recurring roles on Friday Night Lights, The Mentalist, Law and Order: Criminal Intent, and Cybill, which was kind of her breakout role. She'll soon be on TNT's The Librarians.

Christmas Movies Are Kind of Her Thing

In addition to actress, Witt is a singer/songwriter and pianist. Her self-titled album came out in 2009, and a follow-up, Live at Rockwood, was released in 2012. Oh, and in case you think the Christmas thing hasn't infiltrated her music career, she has a single called "I'm Not Ready for Christmas." Her real life seems just the opposite.

More like this
What Does Nancy Jo Sales Think Of 'The Real Bling Ring'?
By Arya Roshanian
The Spice Girls Just Dropped A Brand New Music Video
By Sam Ramsden
Netflix Reveals First Look At Wednesday In The 'Addams Family' Spinoff Series
By Bustle Editors
'Survivor' Is Finally Coming Back To UK Screens
By El Hunt
Get Even More From Bustle — Sign Up For The Newsletter