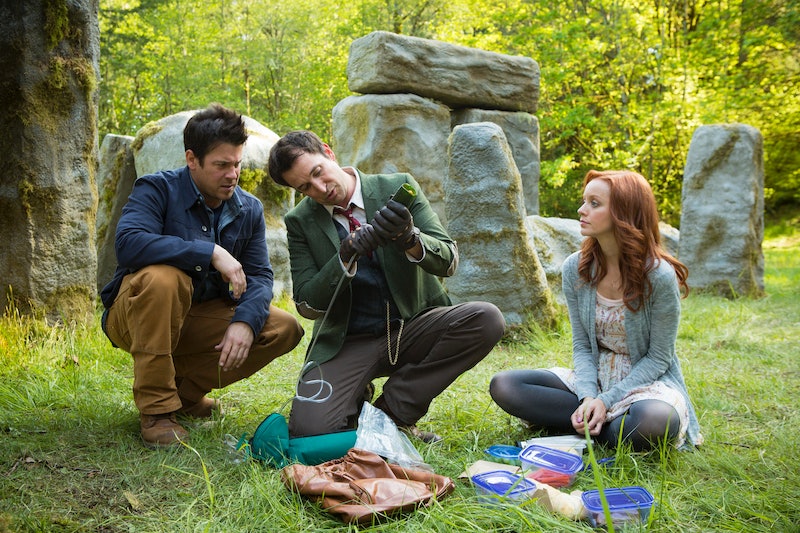 TNT's The Librarians is about, well, librarians. Well, kind of. It's about people who work for an ancient association called The Library, located beneath the Metropolitan Public Library. But instead of checking out books, they use their knowledge to keep powerful objects archived on the side of good. With all of the emphasis on such a literary institution, it makes sense to wonder if the idea for the series came from a book. So, is The Librarians based on a novel — or something else?

Despite all of the bookish-sounding mythology, there is no novel at the heart of The Librarians. But it didn't just spring from thin air. Instead, the basis of the show is... another TNT television project (or three): three made-for-TV movies of the same name. The first, The Librarian: Quest for the Spear aired in 2004, The Librarian: Return to King Solomon's Mines followed in 2006, and The Librarian: Curse of the Judas Chalice rounded out the trilogy in 2008.

No word why, seven years later, TNT would want to revisit the idea as a 10-episode series, except that the movies were popular. We do know that the name changed from The Librarian to The Librarians, plural, because the main character of Flynn Carsen (Noah Wylie) will be joined by passing the torch on to others: Eve, a counter-terrorism expert (Rebecca Romijn); Jake, an art-history genius (Christian Kane); Cassandra, who has synesthesia (Lindy Booth); and Ezekiel, a tech guru (John Kim).

That doesn't mean that the show will never have any connection to the world of letters. Here are some of the show's literary inspirations, as derived from the episode titles. (People who don't want spoilers/speculation should turn away now.)

The Legend of King Arthur

Of course, when you're a secret cabal that uses bookish knowledge to help magical and/or supernatural objects from falling into the wrong hands, knowing Arthurian legend is your bread and butter. It makes sense, then, that The Librarians would go there from jump: the first two episodes seem to have a King Arthur connection. Their titles are "And the Crown of King Arthur" (gets right to the point) and "And the Sword in the Stone."

The synopsis of the third episode, "And the Horns of a Dilemma," references a labyrinth that exists below the skyscraper of a magic corporation. Does "horns" + "labyrinth" = a minotaur, the mythological creature with the head of a bull and the body of a man? In any case, I hope they have a Theseus (or a Goblin King) on-call to slay it.

The fourth episode is called "And Santa's Midnight Run." Santa might not count as a literary figure, but maybe the episode will inspire Flynn to write his own poem a la Clement Clarke Moore. Then he'd get his own reference in the library's card catalog.

More like this
The New 'National Treasure' Series Trailer Teases The Return Of A Popular Character
By Grace Wehniainen
Nicola Coughlan Shared A Lady Whistledown Excerpt From ‘Bridgerton’ Season 3
By Grace Wehniainen, Alyssa Lapid and Sam Ramsden
Harry Lawtey Is Weighing Up The Price Of Success
By Olivia-Anne Cleary
Ruth Wilson’s New Thriller Spotlights A Controversial Irish Institution
By Darshita Goyal
Get Even More From Bustle — Sign Up For The Newsletter