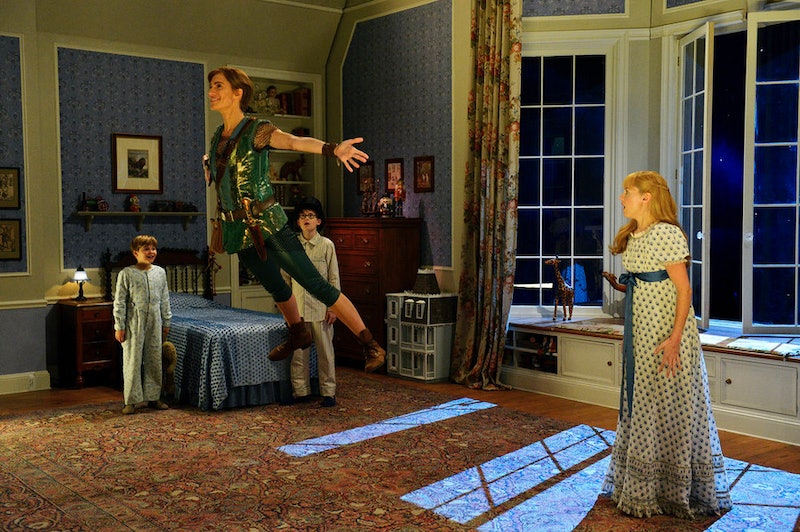 While you were settling in and watching NBC's Peter Pan Live! Thursday night, you might've noticed something missing from the stage. No, not the rest of star Allison Williams' hair — she's sporting a short wig as Peter Pan. I'm talking about Pan's tiny and cute fairy companion Tinker Bell. You know the character I'm talking about. She flutters around in the classic animated Disney adaptation of the musical Julia Roberts famously portrayed the miniature glowing gal in the Robin Williams-as-Peter-Pan movie Hook, directed by Stephen Spielberg. Tinker Bell has even starred in her own films. But in on NBC, something was off. Just how did Peter Pan Live! bring Tinker Bell to life? She was that tiny CGI sparkly thing. Seriously.

She's a classic character reduced to a flash of light that's not even real. I mean, I understand that stage performances often portrayed her as a bell and a stage cue — so essentially the actor playing Peter Pan was talking to a bell — but this is pretty weird, too. So, who or what exactly was Williams as Pan talking to when he was looking for his shadow in the Darling's home? Marnie, her character on Girls? (Sorry, that joke is just too easy.) Even the Lost Boys in Neverland looked a little confused at where Tink was supposed to be and where they were supposed to be talking at.

“Tink is going to be computer generated and manually guided around the screen by a technician," Peter Pan Live! exec producer Neil Meron told Entertainment Weekly about the decision to go with CGI. "The actors won’t be able to see her, but that technician will be able to move Tink with the actors and change her size and color to indicate what she’s feeling. Everything else looked old fashioned. We wanted to see if we could do Tink with new technology.”

While it's a little weird, it probably made more sense to make Tink look like someone's flickering cell phone flash rather than just a bell. I can't help but think, though, they could've found a way to include a mini Tinker Bell off stage. It's musical theater in 2014, after all. And usually Nana the Dog is cast as a man in a dog suit, but Peter Pan Live! found a way to get a real dog into the role. If there's anything these NBC live musicals have taught us, it's that anything is possible — even for Marnie to be a musical theater star.