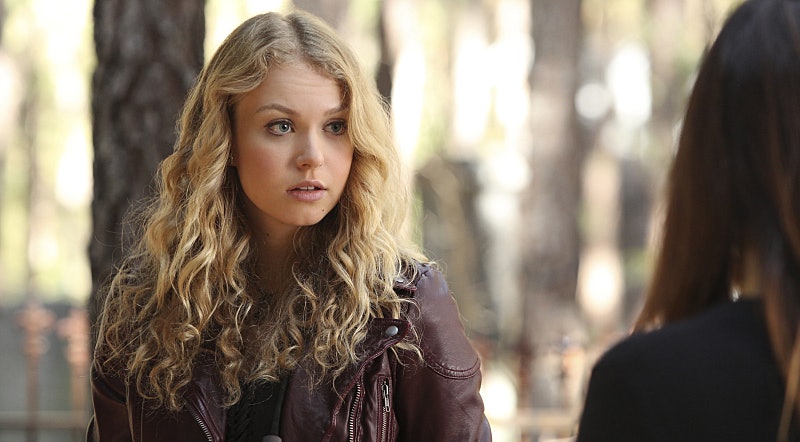 This family reunion didn't take very long. Two weeks ago, The Vampire Diaries connected Jo, Kai, Luke, and Liv as members of the truly screwed up Gemini coven. But, learning that they shared a crazy brother who tried to murder them all wasn't enough for TVD to throw at Liv and Luke before the show goes on winter hiatus. On Thursday's episode of TVD , "I Alone," Kai returned and, after killing a cab driver, he sought out his living siblings. Because, surprise, old grudges die hard and he's ready to finish the job of mass-murdering his family. Boom.

I know what you're thinking — this escalated incredibly quickly. It's like, we went from fearing Kai's return straight to Kai wreaking havoc in the blink of an eye. Apparently TVD's usual, tantalizing slow burn is trapped in Mystic Falls with the rest of the non-supernatural folk and sad Matt Donovan. But, the big news here and perhaps the only news we all need to know is this — Kai is back. So, how did he do it and what the heck does that mean for Luke, Liv, and Jo?

Alaric blamed Damon for bringing Kai back, but it's actually, somehow, kind of Jo's fault. During the previous episode, Kai found the object Jo hid her powers in and was able to absorb them, he then stabbed Bonnie and took her blood, and then drove back cross-country to complete the spell. Because, he really only needed a Bennett witch's blood, not an actual Bennett witch to complete the spell and return home. And that's exactly what he did — it had absolutely nothing to do with Damon compelling Alaric to steal ascendent and then using it to go to 1994 to try to save Bonnie with Elena. Because, newsflash, everyone — Kai already had an ascendant and everything he needed and he used them.

So, what happens now? Kai is clearly still a raging lunatic who's only gotten more crazy during his years trapped in his grunge-themed, supernatural prison. And, on Thursday night, the first thing he tried to do was kill Liv at the bar she works at. (How did he even know she was there?) Now that Kai has Jo's powers, I doubt she matters to him — it seemed like, in his interaction with Tyler at the end of the episode, that Kai's got his sights set on Liv being his new partner in insanity. Which really doesn't bode well for Luke or Jo or any other Gemini that's still living. Will next Thursday's midseason finale be a bloodbath? Absolutely.

More like this
Sara Zwangobani Is A Self-Proclaimed 'LOTR' Super Fan
By Frances Stewart
'The Crown's Matt Smith Reveals Prince Harry's Hilarious Response To The Series
By Bustle UK
Watch The Thrilling Teaser Trailer Of 'Shadow And Bone' Season 2
By Gretchen Smail and Jack Irvin
If 'Entergalactic' Season 2 Happens, You Could Get A New Kid Cudi Album
By Kadin Burnett
Get Even More From Bustle — Sign Up For The Newsletter